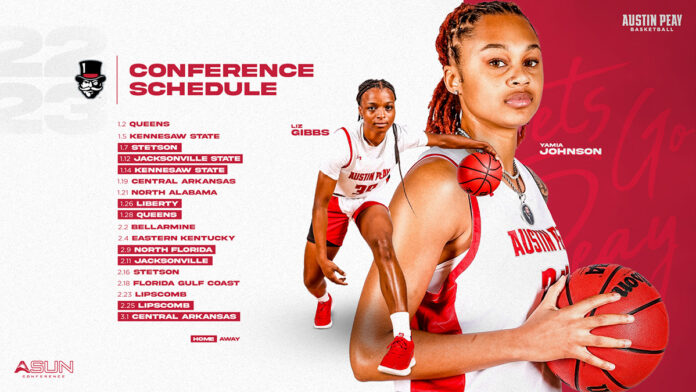 The 18-game conference slate features nine home games and a number of first-time opponents for the APSU Govs. All dates are subject to change with game times to be announced at a later date.

The Governors will make their conference debut on the road against Queens, on January 2nd, in a contest between two first-year ASUN teams. The Govs wrap up the quick two-game road trip when they take on Kennesaw State, on January 5th, for the first time since 2016.

Austin Peay State University hosts its first ASUN game in the Winfield Dunn Center when it welcomes Stetson, on January 7th, for its first-ever meeting with the Hatters. Next up is Jacksonville State which returns to Clarksville, on January 12th, where the Governors are 11-4 all-time against the Gamecocks. The three-game homestand comes to an end when Kennesaw State, on January 14th, makes the return trip for a rematch with the Govs.

The Governors return to the road on January 19th at Central Arkansas in their first trip to Conway, Arkansas since 2014. Austin Peay State University then makes it three-straight seasons they have played North Alabama when it makes the trip back to Flowers Hall, January 21st, looking to make it three-straight wins against the Lions.

Back in the Dunn Center, the Govs square off against Liberty, on January 26th, for the first time in program history before hosting Queens, on January 28th, in a rematch of the ASUN opener. Then it’s back on the road for the Governors to take on Bellarmine, February 2nd, before closing the Kentucky swing with Eastern Kentucky, February 4th, to resume a series that had been played every season since 1978 before the two did not meet last year.

A run of schools from the Sunshine State is on deck for Austin Peay State University when it hosts a pair of first-time foes in North Florida, on February 9th, and Jacksonville, on February 11th. Afterward the APSU Govs head south for a rematch with Stetson, on February 16th, before their first-ever contest against reigning ASUN Champion Florida Gulf Coast, on February 18th.

In the regular season’s penultimate week, the Governors make the short trip to Nashville for a February 23rd contest against Lipscomb before hosting the Bisons in the Dunn Center on February 25th. The doubleheader will mark the first meeting between the in-state rivals since 2018, the Govs lead the all-time series with Lipscomb, 21-6, and have won the last four meetings.

The regular-season finale will take place in the Dunn Center when the Governors host a rematch with Central Arkansas, on March 1st.

The 2023 ASUN Conference Women’s Basketball Championship, March 4th-11th, will be played at campus sites. The 2023 edition of the tournament marks the 43rd year that the league will host the championship.

To keep up with Austin Peay State University women’s basketball as it prepares for its inaugural season in the ASUN Conference, follow along on Twitter and Instagram (@GovsWBB) or check back at LetsGoPeay.com for news and updates.