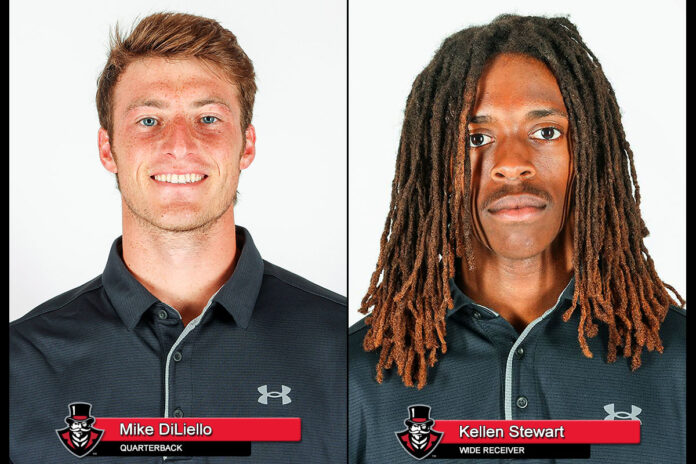 DiLiello, a Pembroke Pines, Florida native, spearheaded a second-half comeback that helped the Governors erase a 17-point halftime deficit and beat No. 16 Eastern Kentucky on Homecoming at Fortera Stadium. DiLiello ran for touchdowns on three-straight drives in the second half, scoring 39 yards (on fourth down), seven yards, and eight yards out.

DiLiello also tossed a 24-yard touchdown to Drae McCray with 5:39 left on the clock to give the Governors an 11-point lead.

DiLiello finished the game with 181 rushing yards, which is the second-most by a DI quarterback this season and is the 18th-best overall mark in the FCS, his 158 yards in the second half alone would’ve been the 29th-best performance in the FCS this season. DiLiello is the first APSU quarterback to run for 100-plus yards since JaVaughn Craig rushed for 164 in the second round of the 2019 FCS Playoffs at Sacramento State.

The graduate quarterback also ran for three touchdowns, which makes him the first Governor to run for three scores since Brian Snead accomplished the same feat against Tennessee State in 2019. The three rushing TDs are also tied for the best single-game mark by an FCS QB this season and the second-best single-game mark in the FCS.

Finally, DiLiello threw his ASUN-leading 14th touchdown pass of the season, which ranks third in the FCS and is already the seventh-best single-season total in APSU history.

A redshirt freshman from Rosenberg, Texas, Kellen Stewart averaged 24.3 yards on three kick returns. Stewart broke a season-long 28-yard return in the first quarter and followed that with returns of 23 and 22 yards in the second quarter.

Stewart’s first weekly ASUN award makes him the third Austin Peay freshman to be named the league’s freshman of the week, joining Kam Thomas and Jevon Jackson. DiLiello has now been named the offensive player of the week twice this season, he is the first player in the ASUN to receive the award twice.