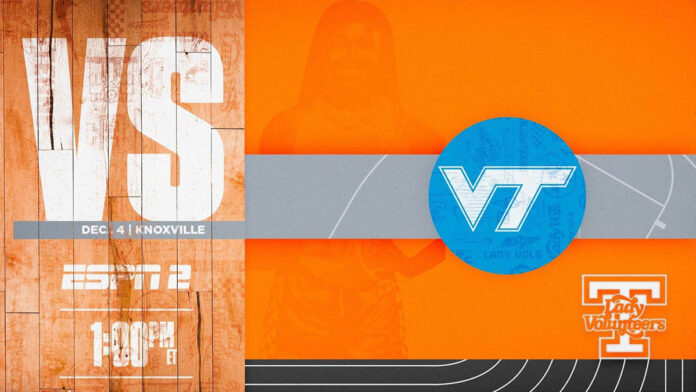 The contest marks the Lady Vols’ third of a six-game home stand and a stretch of nine out of 11 on The Summitt between November 25th and January 5th. Coach Kellie Harper‘s squad is off to a 2-0 start during that stretch on Rocky Top and improved to 3-1 at home this season with dominant wins over Colorado (69-51) and Eastern Kentucky (105-71) last Friday and Sunday.  VT remained unbeaten on Thursday night, handling Nebraska easily, 85-54, in Blacksburg.

The Hokies will represent the third top-10 team in the current AP Poll that UT has met this season, preceded by contests vs. No. 4 Ohio State and No. 5 Indiana. All told, the Hokies are the fifth team in the current AP Top 25 UT has played in nine games, with No. 15 UCLA and No. 23 Gonzaga counting as the other two. The Big Orange women also are slated to meet No. 1 South Carolina, No. 2 Stanford, and No. 3 UConn later in the year, as well as No. 11 LSU.


UT and Virginia Tech are meeting for the 11th occasion and the second straight year, with the Lady Vols owning an 8-2 advantage in all-time match-ups. Last season, on Dec. 5, No. 11/10 Tennessee claimed a 64-58 victory over the RV/RV Hokies in Blacksburg to end a two-game series skid.

Following the UT-VT showdown, the arena will clear and the Tennessee men and Alcorn State will hit The Summitt to face off in an SECN+ streamed contest at 6:00pm. Fans must have tickets to each game to attend both.

About The Jimmy V Classic

Both events are part of ESPN’s V Week initiative, which utilizes platforms to talk to sports fans about the importance of cancer research. To date, ESPN has helped raise more than $155 million dollars for the V Foundation. In 2021, V Week raised $13.35 million, surpassing the previous high of $8.8 million in 2019.

In addition to the Tennessee-Virginia Tech contest being part of the Jimmy V Women’s Classic, Sunday is Knox County School Day.

Other tickets are available at AllVols.com.

ESPN2 will televise the Tennessee vs. Virginia Tech contest, with Courtney Lyle (PxP), Carolyn Peck (Analyst) and Tamika Catchings (Analyst) on the call.

The contest also can be heard on Lady Vol Network radio stations and by audio stream, with Voice of the Lady Vols Brian Rice on the call and Andy Brock serving as studio host.

The Lady Vol Network broadcast also can be heard on satellite radio via SiriusXM channels 135 and 190, and via channel 961 on the SXM App.

Rickea Jackson and Jordan Horston have both scored in double figures the past five games, with Jackson hitting for 10+ in every game but the first and Horston having done so in each game she played except for the UMass content in which she was knocked out by an injury in the second quarter.

Rickea Jackson has carded three 20+ scoring games, including 26 vs. Rutgers, 24 vs. UMass and 20 vs. Colorado, while Jordan Horston filled the nets with 20+ vs. Ohio State in the opener (20) and against Colorado (23) last Friday night.

Tennessee has had six different leading rebounders over the first eight contests, including Jordan Horston, Rickea Jackson, Jasmine Powell, Marta Suárez, Jasmine Franklin, Horston and the trio of Jillian Hollingshead, Horston and Jackson in that order.


Jasmine Powell has 33 assists vs. 16 turnovers for a 2.1 assist/turnover ratio that is fourth among SEC players.

Jasmine Franklin and Jillian Hollingshead have shown signs of settling in the past three games off the bench, with Franklin producing 11 points, nine boards vs. Gonzaga, and Hollingshead coming up with seven points and four rebounds vs. Colorado and 13 points and eight rebounds vs. Eastern Kentucky.

Tennessee has forced an average of 19 turnovers per contest over the last five games, including an opponent season-high 25 by Colorado last Friday.

The UT Lady Vols have held four of their past five opponents under 40 percent shooting, with UCLA’s 43.5 effort serving as the exception.

After averaging 20.8 turnovers over the first four games of the season, UT cut that number to 15.5 over the last four contests, including a season-low 12 vs. Eastern Kentucky.

Defensively, the Big Orange women have averaged 5.6 blocks and 9.8 steals over the past five contests after posting three-game averages of 2.3 and 6.0, respectively, to open the campaign.

Looking Back At The Eastern Kentucky Game

No. 23/24 Tennessee posted a season-high in points, eclipsing the century mark to defeat Eastern Kentucky, 105-71, in a wire-to-wire victory last Sunday afternoon at Thompson-Boling Arena.

The UT Lady Vols (4-4) were led by Jordan Horston, who became the 48th player in Lady Vol history to surpass 1,000 career points during her career. The 6-foot-2 senior guard finished with 14 points on 6-of-10 shooting to go along with eight rebounds, five assists, one steal, and a block in the all-around performance.


Offensively, Tennessee was on fire all day long, shooting 52 percent from the field and knocking down eight 3-pointers. UT dished out a season-high 26 assists, while turning the ball over a season-low 12 times. The Lady Vols won the game in the paint, outscoring the Colonels (4-3), 70–32, and doubling them up on the glass, 62-31. Tennessee grabbed a campaign-best 25 offensive rebounds, which led to a 2022-high 34 second-chance points.

UT’s bench accumulated a season-high 58 points, including impressive performances from sophomore forward Jillian Hollingshead, who posted 13 points and a career-high eight rebounds, and sophomore forward Karoline Striplin, who shot 5-of-6 to post a season-best 10 points.

Tennessee turned in 33 first-quarter points against EKU, going six of 10 from behind the arc and shooting a scorching 59 percent from the floor. The total tied for the 10th-most points scored in a single quarter in program history.

Nine Lady Vols contributed at least one bucket to the 22-point lead, which was their largest first-quarter lead of the season.

All 15 active Lady Vols saw the floor against the Colonels.

Fourteen tallied at least one point, and five Tennessee players ended the game in double figures for the first time this season and the initial occasion since Jan. 2, 2022, vs. Arkansas.

UT racked up a season-best 70 points in the paint against Eastern Kentucky.

Coming into the contest Tennessee’s previous high in the paint was 44 against Ohio State in the season opener.

A Look At The Hokies

VT has beaten Kentucky and Missouri from the SEC and Nebraska from the Big Ten, but Tennessee will be the first-ranked team it has faced in 2022-23.

Georgia Amoore showed out with a triple-double of 24 points, 10 rebounds and 11 assists to lead Virginia Tech past the Nebraska Cornhuskers, 85-54, in Blacksburg on Thursday night.

The Hokies (7-0) had three players score in double figures, led by Elizabeth Kitley, who recorded a double-double with 24 points and 12 rebounds.

Amoore tacked on a triple-double with 24 points, 10 rebounds and 11 assists, and Taylor Soule helped out with 18 points.

Tennessee leads the all-time series over the Hokies, 8-2, including 3-1 in Knoxville, 4-1 in Blacksburg and 1-0 at neutral sites.

In that contest, 13,204 fans were on hand as UT legend Chamique Holdsclaw went over 3,000 career points.

No. 11/10 Tennessee pulled off a gritty win in Cassell Coliseum on December 5th, 2021, defeating Virginia Tech 64-58 to remain unbeaten and card the finest opening to a season in Kellie Harper‘s 18-year career.

UT overcame a seven-point fourth-quarter deficit with a 16-3 run over the final 6:01 to end the Hokies’ 63-game home win streak against non-conference opponents. It also kept the Lady Vols perfect on the season at 8-0, with the program starting with that record for only the seventh time in the past 20 years.

Tennessee was led by graduate guard Jordan Walker, who went four of four from behind the arc to tally 17 points, and freshman guard/forward Sara Puckett, who logged a career-high 15. Junior center Tamari Key turned in her fifth double-double of the season with 11 points and 12 rebounds, while holding VT standout Elizabeth Kitley to four points on 1-of-12 shooting.

The Tennessee Lady Vols basketball team makes two appearances next week when they face Chattanooga at Thompson-Boling Arena on Tuesday at 6:30pm (SECN+), followed by Wright State on Sunday (SECN+) at 2:00pm.

The contest vs. UTC features a December Deal 4-Game Pack, where fans can get two tickets to LV Hoops vs Chattanooga, Wright State, UCF, and Wofford, plus two $10.00 concessions vouchers to each game.

It also has an option for a Weekday Family 4 Pack Deal, including four tickets & four $10.00 concession vouchers starting at $48.00 (plus tax/fees).