Where the elk and the bison roam …

Daytrips and Weekenders. As the summer months and the vacation/travel season approaches, we offer you, our readers, ideas for day trips and weekend excursions to places and events that can be done in a day, or maxed out over a weekend. Time and the high cost of gas fuel our efforts to find local entertainment and activities. This column will appear each Thursday through Labor Day.

Land Between the Lakes has a lot to offer, not the least of which a free roaming bison that, topping the scales at a ton (a very solid 2,000 pounds), leave no doubt as to who has the right of way on the roads in the prairie compound. 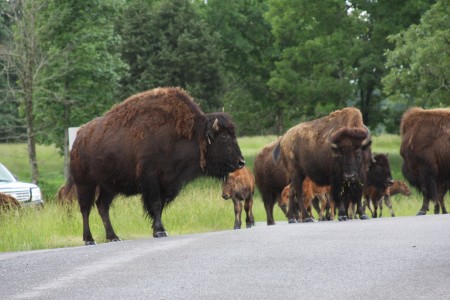 Discounting its paved road, the Elk and Bison Prairie is a step back in time to an age when these magnificent animals roamed free across the American landscape, the midwestern prairies. Though modern living and urban expansion has come perilously close to decimating native prairie landscape, many groups across the midwest are laboring intensively to save and/or restore these landscapes. It’s enviromentally sound and historically smart.

LBL has created a prairie landscape, encouraging the growth of native grasses and plants, many of which have healing properties. The have also restored two herds of native animals: the elegant elk and the bulging bison. Swift, sleek movement, and lumbering, occasionally thundering beats.

The Prairie visits ideally begins with a stop at the Golden Pond Visitor Center, where the film Restoring the Land for Tomorrow is screened. Little House on the Prairie‘s Karen Grassle narrates.

Imagine a landscape 200 years ago when elk and bison numbered in the tens of thousands, leavings swathes of dusty earth in their wake as they migrated from one corner of the prairie to the other. Portions of interstate 24 was once a bison trail. 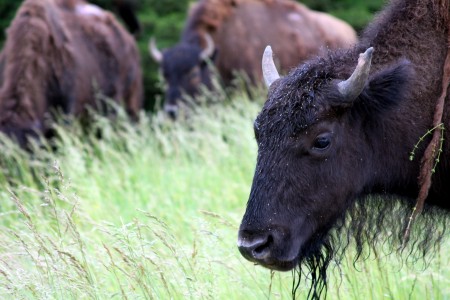 Native Americans hunted, and used controlled burns of the prairie grass to trigger new growth and new feeding areas for the bison while keeping forestlands at bay. Native Americans killed bison for food, and for furs, with a tradition of killing only what they would use. Early settlers and traders shifted the balance of the prairie and decimated the bison herds, hunting them almost to the point of extinction. As the bison moved, so did the natives who depended on them for survival. In the absence of grazing animals, the forests gradually returned.

In the past century and a half, woodlands came to dominate this region. It wasn’t until 1970 that biologists spotted new prairie growth at land Between the Lakes, and that is where the elk and bison now roam. Controlled burns keep the grassland renewed, and the current herds is hearty, healthy and growing. LBL’s prairie is “landscape in the early stages of renewal.”

Today we travel to the bison prairie, dropping our $5 per car admission into the box, grabbing the token it gives back. A short drive puts visitors at the gate where the token is deposited and a large gate swings slowly open. We are in. And we see … nothing. It’s not for a lack of looking. We are on the late side of midday, and as nature-oriented people we also know the prime time for viewing animals in the wild is early morning and late in the day, when animals emerge to feed and drink at the chosen water sources. Midday, in the heat of the sun, most will seek shelter in wooded, shaded areas. The high grasses are natural but inhibit viewing especially at midday.

Undaunted, we drive in a slow procession of the curious, looking from side to side, allowing our eyes to scan the landscape. Still nothing. Not an elk or bison in sight. Not snakes, rabbits, woodchucks, or even a lot of birds. Just as we were about to admit defeat hope sprang in the distance: a small herd of elk galloping across a meadow in the distance. Magnificent. Leaping through the grasses, up the hill … away from us. It was something. 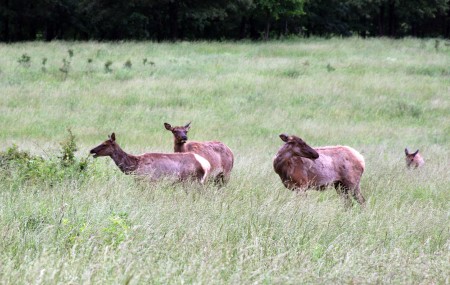 A bit further, again, a line of cars, stopped. One grandmother poked herself up through the sunroof of the family SUV for a bird’s eye view of three adult elk and beyond, a baby barely toping the height of the spring grass. The elk stopped, and in a unique moment each of the three adults faced a different point of the compass. Surveying. On the “skittish” side, the elk were more apt to bound away from their human observers. 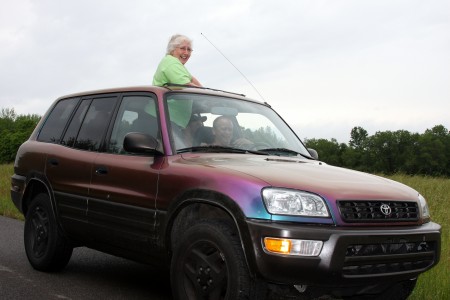 Disappointed with our meager viewing, we were almost at the turn to exit the prairie when ahead of us traffic slowed. Stopped.

Suddenly the earth moved. Huge brown arched backs, those scraggly clumps of shredded fur, the lumbering movement of a beast who knows he has the right of way. One. Then another. And another. Meandering from the fields to the road, cows and calves, a bull or two. Muzzling the grasses, swishing their tails to ward off hundred of flies. The reddish-brown calves scurrying and scampering back and forth from grasslands back to nurse at their mothers udders. 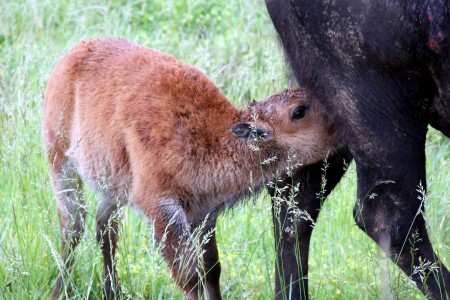 We were captivated. We watched in awe as the beasts we’d seen before from a distance of hundreds of yards in another heavily fenced pen near LBL’s The Homeplace walked through the line of cars, alongside them, in touching distance. Not that you are supposed to touch them; they are, after all, wild.

Out came the cameras. Closer came the bison. They were in no hurry, but neither were their human observers. Close-up, we saw ravaging biting flies, hundreds of them swarming on the bison’s hides, and no amount of tail swishing could rid them of the biting pests.

The adult bison looked a bit ragged, winter fur hanging in matted clumps. The horns looking solid and formidable. And while I am sure that it is not wise (or advised by park officials) to get out of your vehicle and step into the herd, our herd of cars was definitely absorbed by the bison.

“Now I know we got our $5’s worth,” said one of my companions who, as a norm, is “not a country boy.” Nonetheless, this overpowering show of nature’s beasts in the wild captivated him, and the steady click click click of his camera was evidence that this was a moment to be remembered. 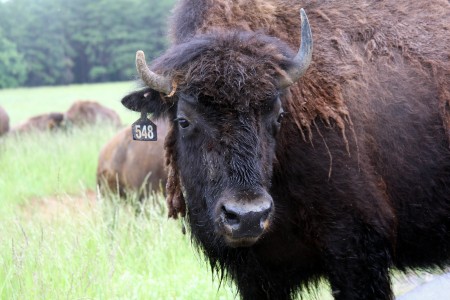 CO publisher Bill Larson sat at the wheel, camera in hand, staring eyeball to eyeball with one of the bison, who paused long enough to make us wonder if the bison was assessing our edibility. Would we be crunchy and good with … well, you get the idea.

By the time the herd drifted past — a long process — and we left the compound, we knew that it would likely not be our last visit to this amazing grassland.

Along the circuitous prairie roadway, there are information stops, places to pull over, step out and read a bit more about the landscape, the plants, and the restoration of a prairie and its inhabitants.

Visitor’s information defines what you can expect to see in what season, what kinds of grasses grow in this habitat, what birds one might expect to see, and how to react to encounters with the inhabitants.

You can find more information on the internet by logging in to www.lbl.org or by calling 1-800-LBL-7077 for specific directions. Plan on an hour to an hour and a half travel time, and bring a cooler with beverages and water, and a picnic lunch to enjoy at one of the many picnic and rest stops along the way. You might want to consider camping at LBL. See the website for more information.

Here are more BILL LARSON PHOTOS from the Elk and Bison Prairie at Land Between the Lakes. 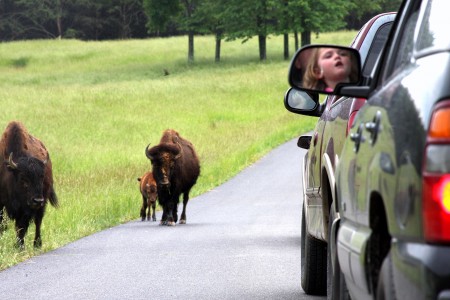 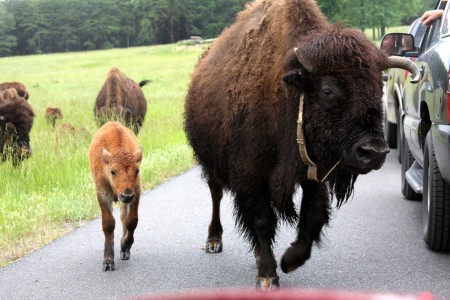 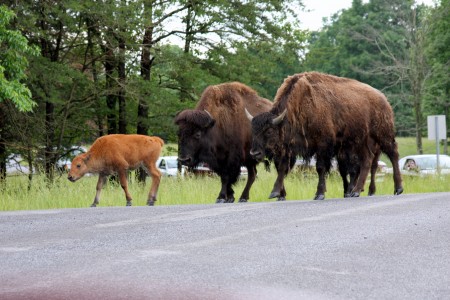 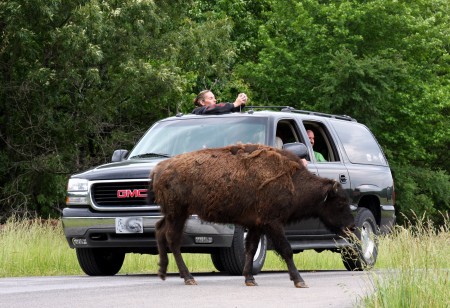 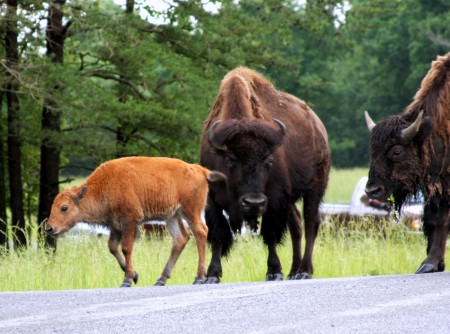 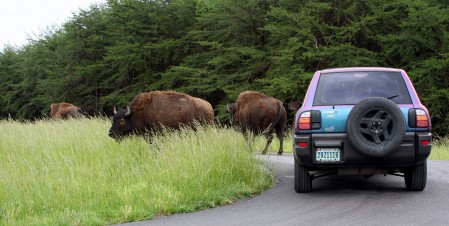