Naomi Wolf speaks on ‘The End of America’ 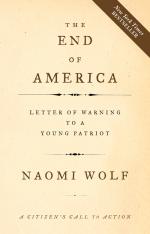 Naomi Wolf, author of the groundbreaking book The Beauty Myth, has been on the speaker circuit promoting her latest book, The End of America: Letter of Warning to a Young Patriot. It is a different track that her prior emphasis on women’s rights and feminism. The End of America is “a harbinger of an age that may finally see the patriarchal realm of political discourse usurped.”

Wolf enters a male-dominated political commentary arena dominated by men to make a compelling argument for civil rights. Her analysis falls closer to the bones of political discourse as presented by Emma Goldman, and presents her case with an energetic urgency as she cautions Americans of a dangerous “fascist shift” brought about by the Bush administration.

Chapters outline the “Ten Steps to Fascism” citing historical corollaries (as well as the pigs in Orwell’s Animal Farm), with headings like “Invoke an External and Internal Threat,” “Establish Secret Prisons,” “Surveil Ordinary Citizens,” “Restrict the Press,” and “Target Key Individuals,” making a case for the existence of fascism outside of a dictatorship.

Her book’s publication through the small press, Chelsea Green Publishing of White River Junction, Vermont, which is committed to politics and “sustainable living.” Here is Naomi Wolf, speaking out an this October 2007 videotaping.