Kunar Province, Afghanistan – U.S. Army Gen. David H. Petraeus, the top commander in Afghanistan, visited Soldiers in the Pech River Valley March 31st to show his appreciation and support for their efforts in rooting out the insurgency in the region over the past 11 months.

Speaking to Soldiers at Combat Outpost Honaker-Miracle assigned to 1st Battalion, 327th Infantry Regiment, 1st Brigade Combat Team, 101st Airborne Division, Task Force Bastogne, Petraeus praised the battalion’s leadership and honored the Task Force Bulldog troops for their relentless determination in fighting in an area that has seen some of the most kinetic activity since the Afghan war began.

“This is simply the best mountain fighting brigade in the United States Army,” Petraeus said of the 1st Bn., 327th Inf., Task Force Bulldog. “There is simply no other unit I would rather have fighting here.”

The Pech River Valley, TF Bulldog’s area of operations, lies near the border of Pakistan in eastern Afghanistan’s Kunar Province.  It is an area where U.S. and NATO forces are engaged in intense fighting, trying to prevent insurgents from slipping in from neighboring Pakistan.

Since mid-February, TF Bulldog has focused on realigning units from the Pech River Valley to more densely populated and strategically important areas in Kunar Province and neighboring provinces. 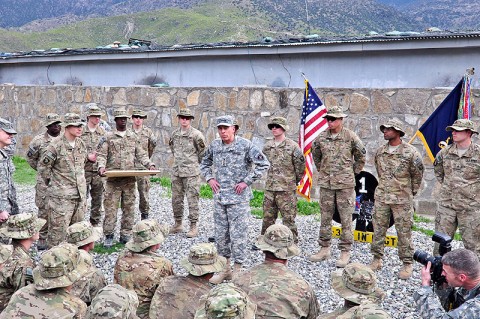 By early March, they’d completed a transition of Forward Operating Base Blessing to the Afghan National Army’s control, the largest base transferred in Afghanistan to date.

Earlier this week, TF Bulldog closed Combat Outpost Michigan and simultaneously executed Operation Bulldog Blitz, another in a line of many offensive operations undertaken by the task force.

“I attribute that to our extensive planning, knowledge of the terrain and people; and, most importantly, to our precise execution on the ground,” said U.S. Army Capt. Robert Reynolds of Huntsville, AL, Task Force Bulldog assistant operations officer. “The enemy could not affect us, although we know he wanted to.”

Petraeus said he was impressed with recent operations and with the battalion’s progress in protecting the Afghan people and advising Afghan National Security Forces and government officials, despite the violent nature of the region. He admitted that he’d been following the Bulldog battalion very closely since the realignment of forces began. 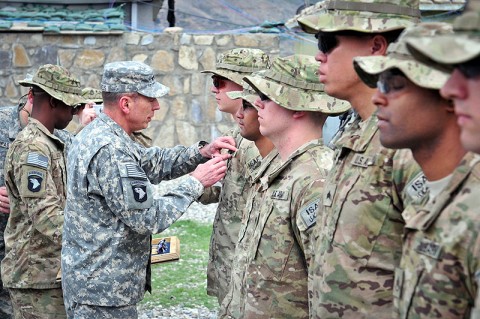 During his visit, Petraeus took time to award one Bronze Star Medal with Valor, three Army Commendation Medals with Valor, and four Purple Hearts to members of the battalion.

Although he did not cite specific figures, the unit’s success has come at a cost. Since deploying last April, the battalion has had 15 Soldiers killed in action and have had 143 wounded in action. TF Bulldog will return home to Fort Campbell KY this spring.

“I’m proud of the effort each and every one of you have put into this fight. You should all be proud as well,” said Petraeus.