This multi-day event allowed electrical workers from throughout the region compete against one another to see who’s the best of the best 45 feet in the air. When the lights go out, for an electric line worker, duty calls. He puts his life on the line to ensure we are able to enjoy all the conveniences that electricity provides to us.

The Rodeo, which includes competitive events for apprentices, journeyman teams of three, individual linemen, and senior individuals, recognizes and rewards excellence in skill, safety and knowledge in their field.

“We are excited to bring this year’s Tennessee Valley Lineman Rodeo to Clarksville,” says Brian Taylor, CDE Interim Superintendent. “This is a fantastic opportunity for everyday citizens to get an up close look at the skills and physical stamina required to do this type of work. All this, while maintaining the highest level of safety.”

The Lineman Rodeo is never the same two years twice as a switch around many of the events and competitions to keep things fresh.

One of the main events that they have every year is called the Hurt Man Rescue, a 170 pound mannequin is placed up on the pole and requires the Lineman to climb up there and rescue it, then get it to the ground in a safe and timely manner. the exercise stimulates someone getting sick or hurt up on the pole.

Other events this year included: 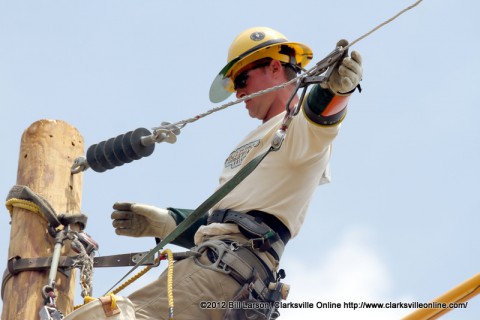 “You want to do these events in a timely manner but the main thing is always safety, that’s what it’s all about. The main concern is safety, and doing it right,”say Kevin Cain, a transmission engineer for CEMC. “Many of these events require the Lineman to climb the pole using hooks or climbing spikes something we don’t do a lot of today, it’s a lot safer to do it out of insulated buckets. We still have these type of events to keep the Lineman up on it, and they enjoy it.”

He continued, “A lot of times you’ll see the bucket trucks up on the road of people inside working in them, but in the real world but a lot of times the poles go cross-country you can’t get the buckets to it so you actually have to climb poles and the work on the poles and that’s where these guys really get to showcase their talents. ”

The the Lineman teams come from all over the TVA and PPA areas. “We probably have representatives from 30 to 35 different utilities from all over the Southeastern United States. Some are from Kentucky, Alabama, Georgia, but most are from Tennessee, of course,”  Cain said.

In addition to the competitive events, there were a variety family activities including inflatables for kids and a high voltage electric safety demonstrations. 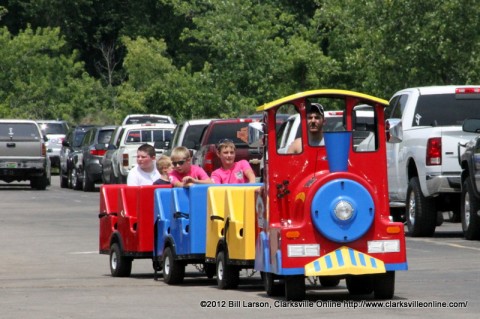 Events like these are educational, not only for the public many of whom get to see Lineman in action for the first time. But also for area first responders who were given some first-class education in real world electrical scenarios that the may encounter when they respond an accident scene.

On Thursday and Friday the Huntsville utility setup  their electrical education trailer which allows them to simulates live lines, they brought the Clarksville Fire and Police departments down here showed them some of the situations involve electricity that they could encounter in everyday situations like a car wreck with downed power lines. So they actually put 7200 volts on that car and showed a ground, and showed it arcing. Cain feels that this was a excellent opportunity for outreach “I think it’s really educational for the public to have the opportunityto come out and see what the Lineman actually do, and some of the talents that they have.”

Cain credited the support of the city of Clarksville and the Clarksville Department of Parks and Recreation as well as the local sponsors for making events like these possible:

The city and everybody has been tremendous to work with. They have helped us out so much and we really appreciate it. Like I’ve said without the help of people like that really could have events like these. They been tremendous!

The local people have been great. the Lineman rodeo held a golf tournament on Thursday and some area businesses purchased hole sponsorships, so when that was finished we brought the hole sponsors signs down to the Lineman Rodeo. But the whole community has been great as far backing us and helping us out

When he asked about the use of the North for work extension as the site for the event Cain said,  “We couldn’t have asked for better spot here down by the river. Not only is it pretty, but were getting a real breeze off the river which is keeping everything nice and cool.”

The Tennessee Valley Lineman Rodeo is a two-day competitive event started in 1998 by and for the employees of Tennessee Valley Authority power distributors. The Rodeo, which includes competitive events for apprentices, journeyman teams of three, individual linemen and senior individuals (age 45 and up) recognizes and rewards excellence in safety, skill and knowledge in their field.

Held in various locations across the Tennessee Valley, the Rodeo provides an opportunity for lineworkers to showcase their talents and for family and friends to show their support. Participants, spectators and sponsors continue to look forward to the Rodeo as it cultivates a pride in the trade and a kinship among participants and attendees alike.

Traveling in 2022, AAA wants you to know these things