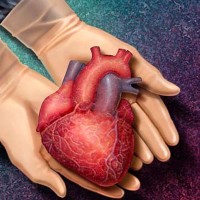 She had already been through a battery of tests, and was taking a lot of medications trying to fix the problem with her heart.  She wasn’t feeling well at all.  The latest round of drugs was not working.  She was not getting better.

She had gone to work with her husband on this day, and by day’s end she said, “I just can’t do anything.  I’m having trouble breathing.”

He immediately took her to Vanderbilt.

It was at this point that the team of heart specialists she had been working with, transferred her to a new team of medical specialists-The Vanderbilt Transplant Team.  This was the first time she realized that she was in serious trouble.

The Transplant Team would keep her alive until a donor could be found.  She was out of options.  She could die at any moment, and for her to live, someone else had to die.

This is the true story of how one woman faced life or death, while awaiting a new heart to beat inside her.  A woman with a strong faith, and an even stronger family, who would watch as she kept getting weaker and weaker.  The story of how friends and family came together as “prayer warriors” to seek God’s healing power for her, and how faith gave them all the strength to survive.

This is also the story of how important organ donation is, and why we should all consider doing it, because without it, Suzanne Simpson would have died.

Suzanne Langford was the first of two daughters born to Preston and Betty Langford in Pontiac Michigan.  Her father was a rugged, hard working construction man, while her mother stayed home to raise Suzanne and her sister Katrina.

Preston moved his family to Clarksville when Suzanne was five years old.  She attended public school and graduated from Clarksville High School in 1971.  Suzanne had a desire to teach, and pursued her degree from Austin Peay State University.  She began her career in 1975, teaching math in the Ft. Campbell School System.

While growing up, Suzanne’s grandmothers taught her the importance of living a “godly” life, and when she was twelve, Suzanne Langford became a born again Christian.   Always active in Sunday School and Church, Suzanne would be committed to working with the children, and helping with the youth programs at First Baptist.Suzanne Langford first met David Simpson at Greenwood Junior High School while in the 8th grade.  They would “go steady” during that time and to make it “official,” David gave her a necklace with a cleat from his football shoes.

It’s what you did in 8th grade.

“She was a cheerleader and she was cute” said David.   ” I knew I would marry her one day.  She was the one.”

Well, as most junior high school romances go, theirs ended when they reached high school.  The would remain friends during that time, but not a couple.

“He ran with a wilder crowd” Suzanne remembers.

So it wasn’t until time for their Senior Prom approached in 1971, that David would ask her to go with him.

“I wasn’t going to go with him,” said Suzanne, “but David was persistent, so I agreed to go.”

David and Suzanne’s romance continued to blossom while attending college.

Suzanne doesn’t remember David’s proposal, but “we always knew we would get married, so we just planned it.”

David remembers it differently, with tears in his eyes.

“My sister Cathy and I had been to Service Merchandise looking at engagement rings, and we had found the one we thought would be perfect.  So one night, on the back steps of Suzanne’s house, I showed her the ring and asked her to marry me, and she said yes.”

David and Suzanne Simpson would begin their life journey together, working hard and raising a family.  They would be blessed with two children, Melanie and Brad.

Life was good.  Life was following a perfect script.

They worked hard, had success and dealt with the everyday challenges of raising two children.  Suzanne was committed to helping others, David was committed to providing for and protecting his family.  They were really just like any other family trying to do the best they could.

But, little did they know, that script would take a dramatic turn, at a time they thought would be theirs.  A time to devote to each other, and the people around them.  To do other things.  Look after her aging parents, and give more time to the church.

To enjoy the fruits of their labor.

But the summer of 2008 would be different.  Things would change.  Suzanne didn’t feel good.  Suzanne was sick.

Little did they know, God had other plans for Suzanne.  Those plans would test her faith, and push her family to the brink of disaster.

And little did they know, it would be ok.

“For I know the plans I have for you,” declares the Lord, “plans to prosper you and not to harm you, plans to give you hope and a future.  Then you will call upon me and come and pray to me, and I will listen to  you. You will seek me and find me when you seek me with all your heart.” – Jeremiah 29:11-13