HomeNewsTrip to the dentist: How partnership builds a healthier Afghanistan
News

Trip to the dentist: How partnership builds a healthier Afghanistan

Khowst Province, Afghanistan – As the Afghan National Army Soldier lay in the dentist’s chair, visibly uncomfortable and in pain, the ANA dentist started probing the partially decayed tooth that was in need of extraction.

Despite being in a country where very few medical and dental facilities can be found, the ANA Garrison Support Unit Troop Medical Clinic located at Camp Parsa, an ANA training base, is a level-two healthcare facility that treats nearly 300 patients a week.

“This is the first time that this Soldier had ever seen or sat in a dentist chair,” said Sgt. Brian Kavanagh, a radiology specialist, Company C, 626th Brigade Support Battalion, 3rd Brigade Combat Team “Rakkasans,” 101st Airborne Division (Air Assault). “In this culture, it is not uncommon to let medical issues go until it becomes so unbearable that they have to go to the doctor.”

“This Soldier had waited nearly two months before coming to the dentist,” he added.

As a result of new equipment, supplies and trained medical personnel, the medical clinic is growing and is better able to support the sick and injured at Camp Parsa.

If he had gone downtown to a civilian dentist they may not have had the medications he needed, said Kavanagh. The only limitation to the clinic now is that they cannot perform surgeries.

“It is good to have the support of the U.S. Army and Coalition Forces, and the Afghan government is really paying attention to the medical care of the Soldiers,” said ANA Capt. Mirwais Hussaini, a dentist with 1st Brigade, 203rd Corps. 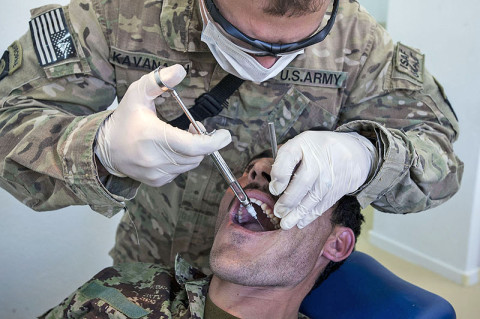 Furthermore, the increased ability to provide better health care, the better the ANA is able to keep soldiers in training and not in the hospital.

“We have class levels for dental that can even prevent a Soldier from even deploying until repaired,” said Kavanagh. “That is something that doesn’t happen here, but the things they are doing now can help keep the ANA Soldiers in the fight.”

“Being the adviser for the administration and operations of the TMC, I was limited by my medical experience,” said 1st Lt. Bryan Spear, medical operations officer with 3rd Battalion, 320th Field Artillery Regiment, 3rd BCT. “So, I would bring assets from Charlie Medical Company, 626th BSB. Having them so close, it just made sense.”

Currently, Charlie Medical Company, 626th BSB oversees the TMC operations at Forward Operating Base Salerno, which is near the ANA Base.

“In the past, I have invited lab techs, x-ray techs and physician assistants to advise and assist the ANA medical staff,” said Spear, a native of Chantilly, VA.

In addition, Hussaini has trained with U.S. Army Dentists for more than three years in Gardez, and is now the only dentist at the Parsa TMC.

“We normally watch and assist them when needed, but it’s really just to see where they are, then we can assess them better based on what we see,” said Spear.

Kavanagh communicates with Hussaini through the use of an interpreter as they conduct the hour-long dental procedure together. The tooth was removed, but further inspection revealed that a second tooth was in need of extraction.

Both procedures were successful, and the Soldier left with a little less pain and some post-care instructions.

“It’s a matter of getting them comfortable,” said Kavanagh “They know how to do it, but it’s getting them to that level that they know they can do it on their own. That is what we are here for.”