“We still have to sharpen our skills, we can’t just say ‘I’m good at what I do’,” said Command Sgt. Maj. Michael A. Grinston, command sergeant major of the 4th BCT, 101st  Abn. Div., and president of the board for the Soldier and NCO of the Quarter. “Boards, and the way we set this one up, are a way to sharpen our skills both mentally and physically.”

Putting their skills to the test, the twelve participants, an NCO and Soldier from each battalion, came from bases all over Khowst and Paktya Provinces, to FOB Salerno for this competition.

“Being in a combat zone, we are busy with daily operations and just to come here, my guys had to put in a lot of hard work and extra effort,” said Sgt. Corey A. Slayton, a Cavalry Scout stationed at Camp Clark, Afghanistan, with 1st Squadron, 61st Cavalry Regiment, 4th BCT, 101st Abn. Div., and native of Johnston City, IL. “I’m really close to my squad, them just doing their job was a big help. They picked up my sector of fire.”

The competition started at 4:00am on July 14th, with the Army Physical Fitness Test.

They then moved in to a timed, multi-task event where they ran in full kit (helmet, body armor, weapon, gloves, ammunition, eye protection and a filled medium rucksack) to a variety of stations. 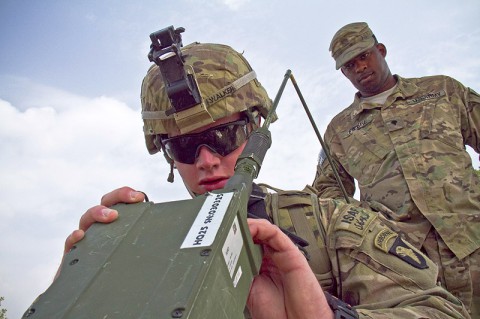 “It was my first time putting an ASIP radio together,” said Pfc. Jeremiah Jayona, a dental assistant with the 801st Brigade Support Battalion, 4th BCT, 101st Abn. Div., first runner up for Soldier of the Quarter and native of Saipan, in The Commonwealth of the Northern Mariana Islands.

Assessing and providing aid to a casualty, calling in a 9-line medical evacuation for that casualty, then dragging a simulated 200 pound casualty 150 yards, was another one of the stations the Soldiers went through. 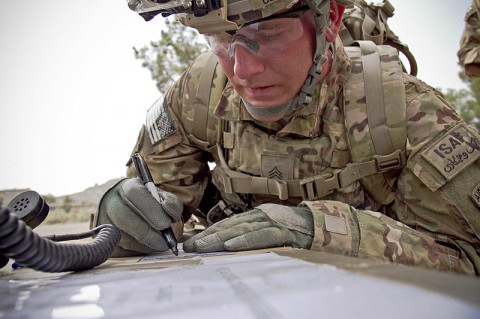 “Evaluating the casualty was the toughest (for me),” said Spc. Sean C. Poole, native of Phoenix, AZ, and infantryman with India Company, 2nd Battalion, 506th Infantry Regiment, 4th BCT, 101st Abn. Div. “There’s a lot to it and there are things I know I missed.”

Their last station was a live fire exercise where they fired their M4A1 Carbines from a variety of distances and firing positions, as well fired an M9 9mm Beretta at close range.

“My favorite part of this event was the shooting,” Jayona said. He enjoyed the challenge of firing from different positions and it was the first time that he has ever fired an M9.

The following morning, the Soldiers had to sit through a board evaluation where they were asked, and graded on, questions ranging from unit history, current events, Army regulations and much more.

“I’ve got a track record for training Soldiers for Soldier of the Month boards and I’ve put a lot of effort in to that,” expressed Slayton. “As far as (me going to) the board itself, I was way more prepared for it because of the coaching I provide to better my Soldier’s tactical and technical proficiencies.”

“I think the Soldier of the Quarter competition, in general, keeps you on your toes and keeps you learning,” said Poole. “I had very good preparation and I owe it to my leadership for where I am right now.”

“Even though there can only be one winner for the NCO and Soldier of the Quarter, we hope all of the competitors are now focused,” said Sgt. 1st Class Leonard N. Taylor of 1st Battalion, 506th Infantry Regiment, 4th BCT, 101st Abn. Div. “We want them to say ‘hey, I was close, let me get my leaders to help me continue to prepare myself so maybe I can win the next one’.”