That operation set several precedents: Afghan National Army and Air forces pooled their resources for a joint air assault; ANSF made their presence known in a little-patrolled area; and Afghans took the lead.

“What we’re starting to do is have a smaller and smaller advisor footprint forward of the Kandak because they’re capable of providing mission command forward,” said U.S. Army Capt. John Reinke, SFAAT team leader, of Greensboro, GA, during the Hesarak mission. “Now we’re starting to work back at the Kandak headquarters to ensure they’re able to mirror the systems that we’ve been able to develop with them.”

Continuing this advancement, SFAAT Blackhorse recently transitioned to level-two advising, a method of interaction which pushes Afghan forces to greater prominence within the local community. 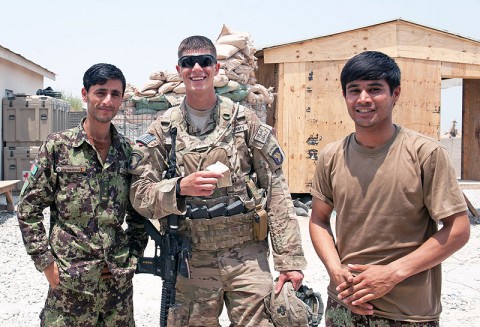 On July 7th, the SFAAT flew into former Forward Operating Base Connolly to consult with ANA counterparts to see if operations were continuing smoothly. The meetings between the colleagues – friends – went well on the whole.

When he was first introduced to the ANA intelligence officer, said U.S. Army Sgt. 1st Class Dewey Mullins, SFAAT S2/intelligence advisor, of Elkhorn City, KY, it took a while to build up the relationship. After they’d been working together for a few weeks, however, they both started sharing information back and forth, and finding better ways to accomplish tasks.

“I was surprised at how efficient they were and professional when I first met them,” Mullins said. “They actually care about trying to take care of their country.”

This professionalism and proficiency were prevalent throughout the Kandak’s various parts, from intel to command, and from tactical to day-to-day operations.

While the ANA has come into its own, the working relationship with the SFAAT and U.S. forces continues. But the footing is more equal now.

“I think that was the biggest thing we got out of this,” Henning said. “We got a solid partnership.”