Clarksville, TN – Austin Peay State University women’s golf team will utilize a tri-match to prepare for the Ohio Valley Conference tournament when it travels to Huntsville, AL, Saturday, to play against Belmont and Murray State.

The trio will play at Hampton Cove, the northern gateway to the Robert Trent Jones Golf Trail and will play the Highlands Course.

The Lady Govs and the remainder of the OVC women’s programs will play just west of Huntsville at Muscle Shoals at that Robert Trent Course, April 21st-23rd, for the OVC championships. 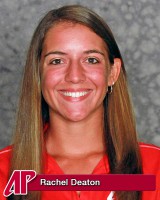 The Lady Govs are coming off a second-place finish at the WKU Lady Topper Classic. Senior Rachel Deaton, playing her season’s best golf, finished sixth in the event with a 234, one shot ahead of sophomore Jessica Cathey.

Senior Tala Mumford was APSU’s third best finisher with a 237. That trio along with freshmen Morgan Kauffman and Amber Bosworth will comprise the Lady Govs squad while junior Meghan Mueller will play as an individual. Bosworth finished with 77-79 for a 241 to earn her spot while Mueller shot a 247. 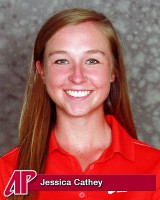 “We are close,” Robson said. “We did some things really, really well in Western’s tournament—we still had a few hiccups, but I think we took away from the tournament that we are getting closer.

“We have had some good scores from some of our golfers but we still need a couple to step up. Hopefully, that will be what Saturday is all about.

“Like everybody else, the weather got us off to a slow start. But we were able to play some down in Florida and it got us some time on the course—it allowed us to get our feel back and hopefully peak at the right time at the OVC championships.”