Montgomery County, TN – A six-unit apartment complex on Baltimore Drive was quarantined today, August 25th,  after agents of the 19th Judicial District Drug Task Force found a methamphetamine lab in one of the units.

Joseph Fox, 47, who gave a 1611 Baltimore Drive Apartment 5 address was booked into the Montgomery County Jail on charges of promotion of meth manufacture.

John Ketter, 28, who gave a 612 Madison Street Apt. 7 address was also booked on charges of initiation of the process with the intent to manufacture methamphetamine and unlawful drug paraphernalia. His bond was set at $51,000.

This investigation into this incident is ongoing. 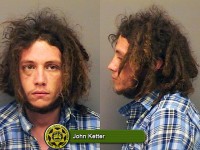