Nashville, TN – The Tennessee Titans (1-4) host the the Atlanta Falcons (5-1) this week at Nissan Stadium (capacity 69,143). Kickoff is scheduled for noon CDT on Sunday, October 25th. The Falcons will appear in a regular season game at Nissan Stadium for only the third time. The Titans took both of the previous two meetings at the venue, winning 30-17 in 1999 and 20-13 in 2007.

This week’s game will be televised regionally on FOX, including Nashville affiliate WZTV FOX 17. Thom Brennaman will handle play-by-play duties alongside analyst Charles Davis with Tony Siragusa serving as an on-field analyst.

Additionally, Westwood One Sports will broadcast the Titans-Falcons game to a national audience. John Sadak (play-by-play) and Ross Tucker (analyst) will have the call.

This week marks the final game for the Titans in a rare span that includes four home games and a bye. They were last on the road at the Cleveland Browns on September 20th, and the next away game they will play is November 1st at the Houston Texans, giving them five weeks during the regular season without a road contest. In the 56-year history of the organization, that has happened only three previous times: 1960, 1964 and 1967.

The Titans hosted the Miami Dolphins last week and fell by a final score of 38-10. The Dolphins forced four turnovers and produced six sacks on defense in the contest, while on the other side of the ball they generated 434 total yards, including 180 rushing yards.

Titans rookie quarterback Marcus Mariota was 21-of-33 passing for 219 yards, one touchdown and a pair of interceptions against the Dolphins. Through the first five games of his career, the second overall pick owns a 93.2 passer rating, completing 103 passes for 1,239 yards, nine touchdowns and five interceptions on 161 attempts. 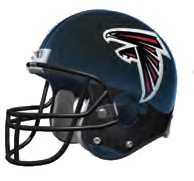 As they try to keep pace in the NFC South with the 5-0 Carolina Panthers, the Falcons will have 10 days to prepare for the Titans. They were in action most recently on Thursday, October 15th at the New Orleans Saints, where they suffered their first loss of the season. Matt Ryan’s 295 yards passing and Devonta Freeman’s 100 yards rushing were not enough to overcome the Saints in a 31-21 defeat.

Nevertheless, the Falcons are off to a laudable start under new head coach Dan Quinn, who was hired during the offseason after coordinating the vaunted Seattle Seahawks defense for the last two years (2013-14). During that time, the Seattle defense allowed a league-low 270.4 yards per game, 15.2 points per game, and 178.8 passing yards per game.

The Falcons suffer no shortage of star power on their veteran roster, beginning with Ryan, the owner of nearly every Falcons passing record. The three-time Pro Bowl selection has topped the 4,000-yard passing mark in each of the last four campaigns and has a franchise-best 29,917 career passing yards. In 2015, he has thrown for 1,751 yards (third in the NFL) to go along with eight touchowns and four interceptions.

Fans are encouraged to bring their old cellular phones to the Titans-Falcons game and donate them at collection sites outside of Nissan Stadium. The collection will benefit Cell Phones for Soldiers, a non-profit that collects old cell phones, sells them for recycling and then uses the income to purchase prepaid calling cards for U.S. servicemen and women stationed overseas.

What to Look for this Week

The Titans conclude a span of five weeks without a road game, including four home games and a bye.

The Titans and Falcons have met in each of the last three preseasons, including a 31-24 Falcons win at the Georgia Dome in the first week of the 2015 preseason (August 14th).

The first preseason game ever played at Nissan Stadium was a 17-3 victory for the Titans over the Falcons on August 27th, 1999.

The Falcons took the opening kickoff of the second half and scored their second touchdown of the game, but only after they were helped by a key Titans penalty. On a seven-yard completion by the Falcons on third-and-10, the Titans were whistled for illegal contact. Then, on successive plays, Ryan connected with Roddy White on a 43-yard pass and Turner rumbled into the end zone for a four-yard touchdown.

Following an exchange of punts, the Falcons appeared ready to thwart the Titans’ hopes. They drove deep into Titans territory, when an offsides penalty was called on the Titans on fourth-and-one to set up a first-and-goal. But middle linebacker Colin McCarthy delivered a blow on Turner to knock the ball loose, and linebacker Will Witherspoon recovered the fumble.