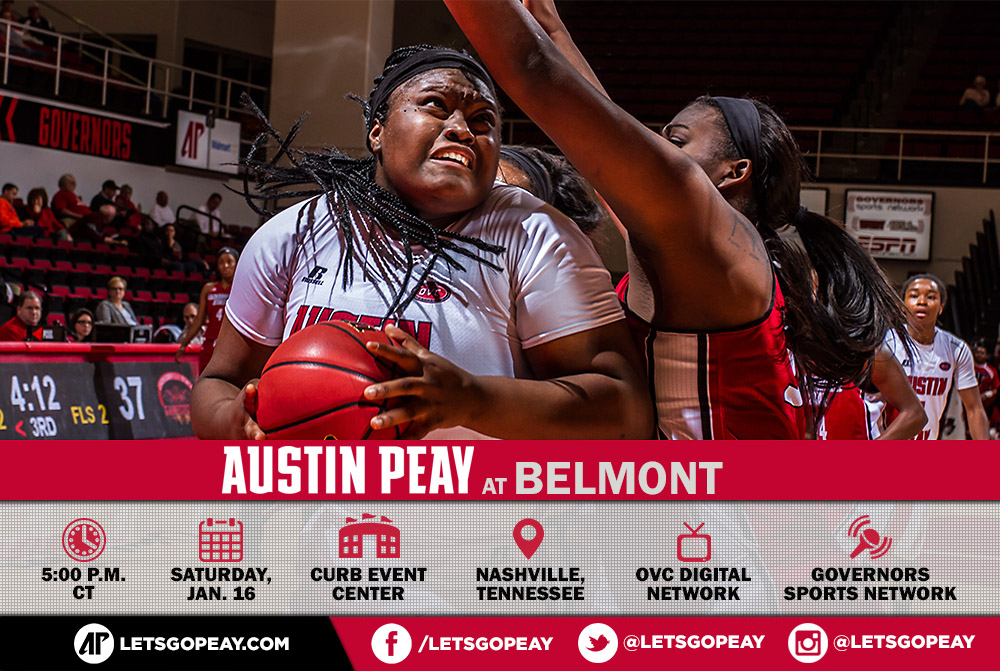 Nashville, TN – Austin Peay State University women’s basketball team will look to bounce back from its season’s first Ohio Valley Conference loss when it returns to Nashville for a 5:00pm, Saturday contest against Belmont at Curb Event Center. 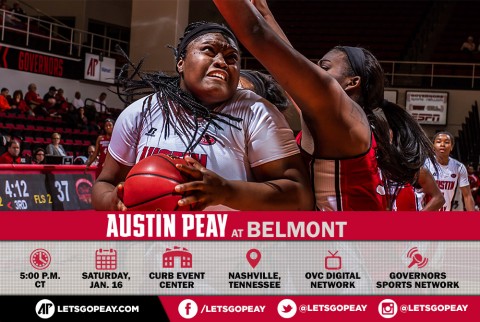 The Govs suffered their first OVC loss – 66-58 at Tennessee State, Thursday – despite mounting a come-from-behind effort to take a fourth-quarter lead for the third consecutive outing.

And for the third straight game, APSU rallied to take a fourth-quarter lead, grabbing a four-point advantage with 6:19 left. However, the Govs failed to score during the final 6:19 and Tennessee State scored the game’s final 12 points to win the contest.

Nine different APSU players scored in the contest as head coach David Midlick utilized 11 players. Junior center Tearra Banks led Austin Peay with a 13-point, six-rebound performance off the bench, making 4-of-5 from the floor. Senior guard Tiasha Gray overcame a poor shooting night to finish with 14 points on 4-of-16 shooting, including 1-of-7 from three-point range.

The game at Tennessee State was the start of a difficult three-game road trip for Austin Peay. Tennessee State and Belmont – the first two teams on the road trip – own the league’s longest home win streaks at eight and seven wins, respectively. Following Saturday’s contest, APSU travels to Morehead State which has four of its six wins on its home court.

Belmont leveled its OVC record a 2-2 with an impressive 87-61 home victory against Murray State, Saturday. The Bruins started OVC action with back-to-back losses but have rebounded with two straight home wins.

Against Murray State, Belmont’s offense made 52.3 percent (34-of-65) of its shots in a wire-to-wire win. All five Bruins starters reached double-digit scoring territory, forward Kylee Smith leading the way with a 23-point, six-rebound, five-assist performance.

Austin Peay and Belmont will meet for the 14th time since 1976-77, Belmont leading the series by a slim 7-6 margin. The Bruins have won two of the three OVC regular-season meetings, the Govs breaking through for the first time in league play with last season’s 72-59 victory in Clarksville, TN.

Bank on Banks
Junior center Tearra Banks is in rarified air at the season’s halfway point, entering Saturday’s game ranked ninth among Division I players in field goal percentage (60.9). Only one player in APSU history has finished a season shooting better than 60 percent – Gerlonda Hardin, who accomplished the feat all four years she played at Austin Peay and finished her career shooting 61.8 percent from the floor.

Freshman guard Darby Maggard leads the OVC and is ranked among the nation’s leaders in assists (42nd, 5.2 per game) and three-point field percentage (45th, 40.6 percent) entering the game.

Give it back-to-back wins against Belmont… Be its first win at Curb Event Center since the 2011-12 season… Be its first road win this season, ending a nine-game road losing streak.