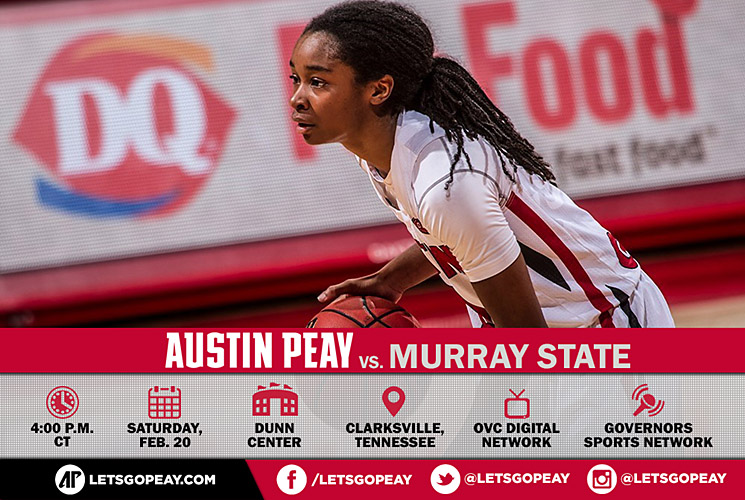 Clarksville, TN – After seeing the end of the 2015-16 road schedule that saw Austin Peay State University women’s basketball team earn just one road win in 16 tries, its safe to say the Governors are excited to spend their final two regular-season Saturday’s in the Dunn Center. 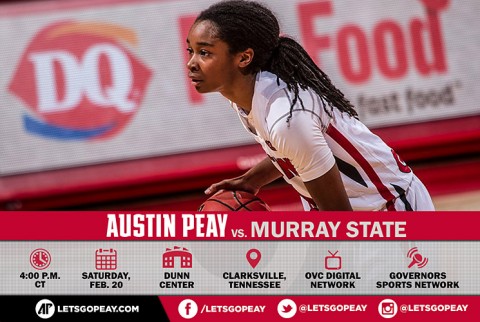 The final push to the Ohio Valley Conference Tournament begins Saturday against Murray State, with tipoff scheduled for 4:00pm in the Dunn Center.

The Governors seek to exorcise some demons from their February 6th loss to the Racers. After falling behind by 25 points early in the third quarter, Austin Peay mounted a furious comeback and briefly took the lead in the fourth quarter before fading late. In her season’s lone appearance off the bench, Tiasha Gray scored a team-high 18 points–all in the second half–at the CFSB Center.

Saturday’s contest will pit the current OVC Player(s) of the Week against one another in Gray and Murray State’s Ke’Shunan James.

Gray earned the honor after pouring in 29 points to help the Govs topple conference-leading UT Martin and end a nine-game losing streak to the Skyhawks, Saturday, while James had 20 points and 10 boards against SIU Edwardsville and led the Racers with 18 points against Southeast Missouri, both victories helping the Racers push to the postseason.

The Govs are coming off a 94-75 loss at SIU Edwardsville to close the book on the road schedule in 2015-16. Tearra Banks led the Govs with 21 points–her fourth 20-point outing in 2015-16–while Gray chipped in with 12 points and 10 assists for her season’s fourth double-double.

Beth Rates added 15 points but was held without a rebound for the first time in 2015-16. The Governors had no answers for Shronda Butts (30 points, 10 assists) and Sidney Smith, who came off the bench to hit eight three-pointers.


A win would tie the season series against Murray State and give Austin Peay a leg up in the race for the OVC Tournament.

The Governors need to stay ahead of Tennessee State, which owns the tiebreaker and is 5-8 in league play entering the weekend, and a win would draw them even with Murray State, with the Governors owning the tiebreaker thanks to a split season series and the win against conference-leader UT Martin, February 13th. Austin Peay lost its lone match-up to Tennessee Tech–who the Governors are currently tied with at 6-8–back on January 9th.

About the Lady Govs

Facing one of the nation’s toughest nonconference slates (27th ranked) took its toll early as APSU averaged just 59.3 points per game against its 11 Division I opponents. It has popped the lid on its offense in conference action, averaging 73.3 points per game and reaching the 80-point plateau six times in OVC action.

During the nonconference portion of the schedule, Gray and Banks scored over 50 percent of APSU’s points. However, that percentage has declined in OVC play, with the duo averaging just 44.7 percent of the team’s scoring.