HomeSportsAPSU Lady Govs Basketball takes on Eastern Kentucky in opening round of...
Sports 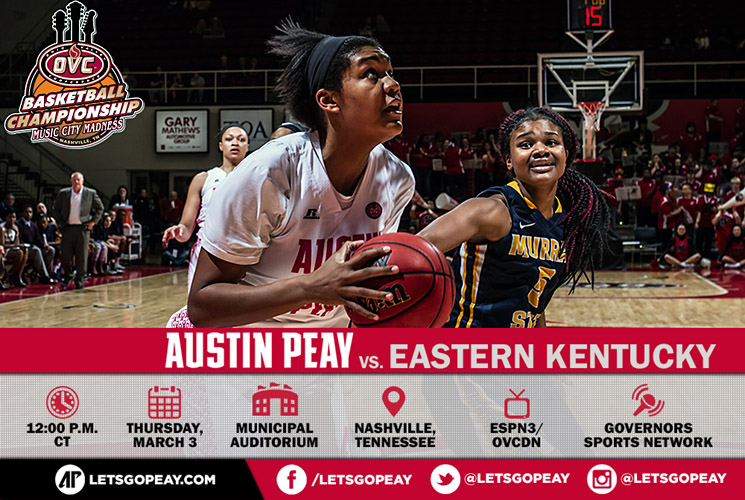 Clarksville, TN – It’s back to the tournament for Austin Peay State University women’s basketball team, which squares off as the fifth seed against fourth-seeded Eastern Kentucky, 12:00pm, Thursday, March 4th at Municipal Auditorium in the opening round of the 2016 Ohio Valley Conference Tournament. 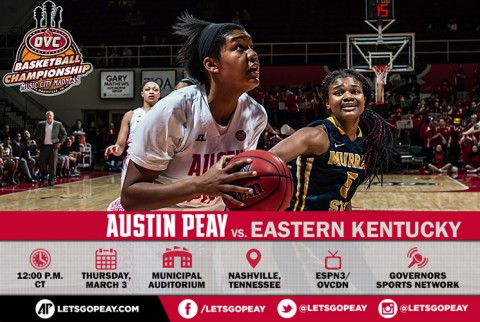 In head coach David Midlick‘s first season, the Governors have had their share of ups and downs, including a 1-15 record away from the Dunn Center.

But Austin Peay caught fire down the stretch, winning three of its final four contests to go from bubble contender to comfortably qualified for the fifth spot in the tournament field.

This is the second season in a row and 22nd time in history that Austin Peay has achieved a berth in the OVC Tournament.

Austin Peay and Eastern Kentucky met in the OVC-season opener, January 2nd, with the Governors winning in convincing fashion, 94-66, in the Dunn Center.

The Colonels enter the postseason on a similar roll to that of Austin Peay, winning four of its final five games and six of its last eight after a 4-3 start to OVC play. Jalen O’Bannon (17.4 ppg, 10, rpg) earned first-team All-OVC honors as well as a spot on the All-Newcomer team after transferring from Arkansas State, while Shameekia Murray (14.3 ppg, 5.3 rpg) was named second-team all-conference.

The Peay and the OVC

The Governors enter OVC Tournament play with wins in three of their last four contests, all three coming against tournament qualifiers–UT Martin (February 13th), Murray State (February 20th) and Southeast Missouri (February 27th). A quick look at APSU’s history in the tournament and its recent history against the field and potential upcoming opponents:

She’s one of only three players (C. Moye, TTU; P. Chambers, TTU; D. Carson, Youngstown State) in OVC history to break into the top-10 all-time in both assists and steals. Her upcoming milestone marks are listed below:

History On Our Side

Austin Peay sports a perfect 4-0 record against opening-round opponent Eastern Kentucky in OVC Tournament play, having defeated the Colonels in 1994, 1996, 2002 and 2004. Should the Governors advance this time around, they own a 2-0 tourney mark against UT Martin (last played in 2003) and a 4-1 record against Murray State (last: 2012) in OVC Tourament action.

David Midlick is well-versed in conference tournament play, having reached the postseason in 11 of his 12 seasons of coaching, including both season’s of his previous head coaching tenure at Delta State (2012-14).

A team with Midlick roaming the sidelines has advanced at least one round in each of the previous five seasons: Memphis (second round, American Athletic Tournament, 2015), Delta State (Gulf South Conference semifinals, 2013; GSC champion, 2014) and his previous APSU tenure (OVC Tournament Championship game, 2011; semifinals, 2012).