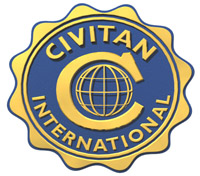 Clarksville, TN – Local heroes were honored by the Clarksville Civitan Club at their Public Safety Awards Luncheon on Wednesday.

The annual event recognizes heroic first responders who went above and beyond to save lives, rescue residents from fires, capture dangerous criminals, and provide medical services under difficult and traumatic circumstances.

Deputy Ethan Moss with the MCSO was recognized for saving a man’s life earlier in the year for quickly applying an AED and performing CPR on a 54-year-old man who wasn’t breathing.

Officer Michael Hackney with the CPD was honored for his self-sacrificing pursuit of armed suspects on two separate occasions. In both cases Hackney was able to apprehend the suspects and secure their firearms with no injuries to himself or the suspect.

Firefighters Chuck Morrison and Kevin Hatfield with CFR were recognized for saving the lives of four residents in an early morning apartment fire. Upon arrival Morrison and Hatfield discovered residents were trapped and jumping from the burning building. They immediately began rescue operations. Despite subzero temperatures and six inches of snow, all 14 residents of the apartment building were safe, including the four whose lives were in immediate danger.

Paramedic Steve Harris with the MCEMS was honored for his tireless works as a Paramedic/FTO saving the lives of countless citizens on a daily basis. From reviving patients who are near death to working trauma scenes, he is known for his dedication and compassion to his patients and peers.

William Jackson with the MCVFS was honored for his volunteer work with the Cunningham Volunteer Fire Department as their Captain, Medical First Responder, and Firefighter. Last year he responded to an astounding 391 calls out of 538 his station received. Jackson volunteers his time to the station, while working full time for a local heating and air company.

Reserve Deputy Tim Neal with the MCSO was recognized for his volunteer work with the Criminal Investigations Unit and his work as the Director of the Reserve Deputy Program.

The MCSO, CPD, MCEMS, MCVFS, and CFR would like to thank the Clarksville Civitan Club for honoring our first responders. We appreciate everything your organization does for our community.