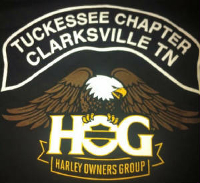 Clarksville, TN – The Tuckessee Harley Owner’s Group recently took a group ride to the Maker’s Mark Distillery in Loretto, Kentucky.  In what was described as a “hookie day” ride, members took leave of absence from their work stations to spend the day on the open road.

After meeting at Appleton’s Harley Davidson in Clarksville, the group pulled out at 9:00am for a full day of riding and fellowship.

Their route took them through Port Royal State Park, into Kentucky where they picked up Highway 79 through Russellville, and on to Bowling Green, where they made their first “pit” stop. From there, they headed north and enjoyed a picture perfect day for riding.

Once the group landed in Loretto,  they rolled into the sprawling Maker’s Mark complex, having passed a number of their newly constructed warehouses along the way. A major expansion of the company was announced in 2015.

Loretto is a town of just over 700 people in Marion County Kentucky.  The city takes its name from the Sisters of Loretto, a Catholic congregation founded in 1812 at nearby St. Mary’s.  The sisters began a school at the site to educate the frontier children.  By 1833, the community was large enough for it’s own post office and was formally incorporated in 1866.

Once the riders secured their machines, they were ready for the tour.  The cost is only $9.00 and is worth every penny.  Our tour guide was originally from London, England and had spent a good part of his career in the wine business, but eventually found himself settled with a family and working for Maker’s Mark.

The tour took about an hour and walked the members through every stage of production.  At the end of the tour, members were taken to the “tasting” room where they were given a sample of the final product to help them understand how to enjoy the bourbon.

They sipped five different samples, giving them a taste of every stage of production.

After a visit to the gift shop, members then split up into groups to plan their trip back to Clarksville.

Some stayed to enjoy a meal at the restaurant on the grounds of the facility while others took flight for home.

The Harley Owner’s Group is open to bikers in the Clarksville, Fort Campbell area and meets monthly.  For more information, just visit Appleton’s Harley-Davidson located on the 41-a bypass in Clarksville Tennessee.