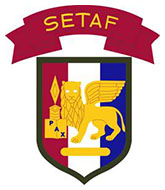 Accra, Ghana – Participants from 20 countries celebrated the conclusion of United Accord 2017, a combined-joint military exercise at the Kofi Annan Peacekeeping Training Centre, Accra, Ghana, May 30th.

The U.S. Ambassador to Ghana, the Honorable Robert P. Jackson, provided remarks at the closing ceremony expressing appreciation to partnering nations and emphasizing the importance of readiness and partnership.

“You are guardians of your homelands and the protectors of our collective security,” said Jackson. “It is only through partnership that we can address existing conflicts and prevent future ones.”

Austria, Belgium, Germany, Italy, Netherlands, the U.K., and the U.S. also participated in the 12-day exercise co-directed by Ghana and the United States.

“One of the most important parts of United Accord 2017 is that it’s a professional learning environment where military experiences, lessons learned and best practices are shared amongst U.S. and African partners,” said Brig. Gen. Kenneth Moore, Deputy Commanding General of U.S. Army Africa and co-director of UA 2017.

About two hours outside of Accra is the Ghana Armed Force’s Bundase Training Camp. There, Soldiers from the GAF and U.S. participated in a bi-lateral field training exercise in heat soaring above 100 degrees.

“It’s a great experience, especially from a leadership perspective. Picking up, and moving to a different country there is a lot of different considerations that I didn’t know would be there,” said 1st Lt. Mark Pangilinan, 1-506th Inf. Regt.’s fire assistant officer.

“Being able to execute our job the same way we would back home in a new environment shows us we really can perform our tasks the way we are trained on, no matter what the situations are. It’s been a pretty solid exercise,” said 1st Lt. David Thame, 1-506th Inf. Regt.’s fire support officer.

“This year is particularly noteworthy, as it marks the first time that African partners taught a U.S. regionally aligned force,” said Jackson at UA17’s closing ceremony. “This was an incredible opportunity for our forces to train with, and learn from, our African partners, and gain experience in austere, jungle environments.”

“Conducting training in Ghana has allowed these Soldiers within the battalion to see different terrain, different climate than what they are used to back at Fort Campbell,” said Cavanaugh.

“The craziest thing I’ve done since I’ve been here is, I ate a snake. Python is extremely spicy. I got to watch them [GAF] prepare that and cook it for us and it was pretty cool. I’ve never eaten snake before,” said Specialist Bryan Young, a U.S. Army Soldier and recent graduate of the GAF’s Jungle Warfare School.

All 62 Soldiers graduated this grueling school despite unfamiliar illnesses and injuries they don’t normally experience back in their home station, Fort Campbell, Kentucky.

United Accord 2017 is the fifth annual, multinational exercise hosted by U.S. Army Africa in the western region of Africa. Until 2017, the exercise was formerly known as “Western Accord.”

Before participants depart, each participant from the CPX, FTX and JWS will conduct an after action review to discuss positive outcomes and list necessary improvements for future exercises. Participants are encouraged to bring the skills and lessons learned from the exercise back to their home countries.

“Our partners in Africa stand against terror and conflict, and for peace, prosperity, and security. The United States stands with you. Through continued partnership we will make Africa, and the world, more peaceful, prosperous, and secure,” said Jackson. “…we look forward to United Accord 2018.”