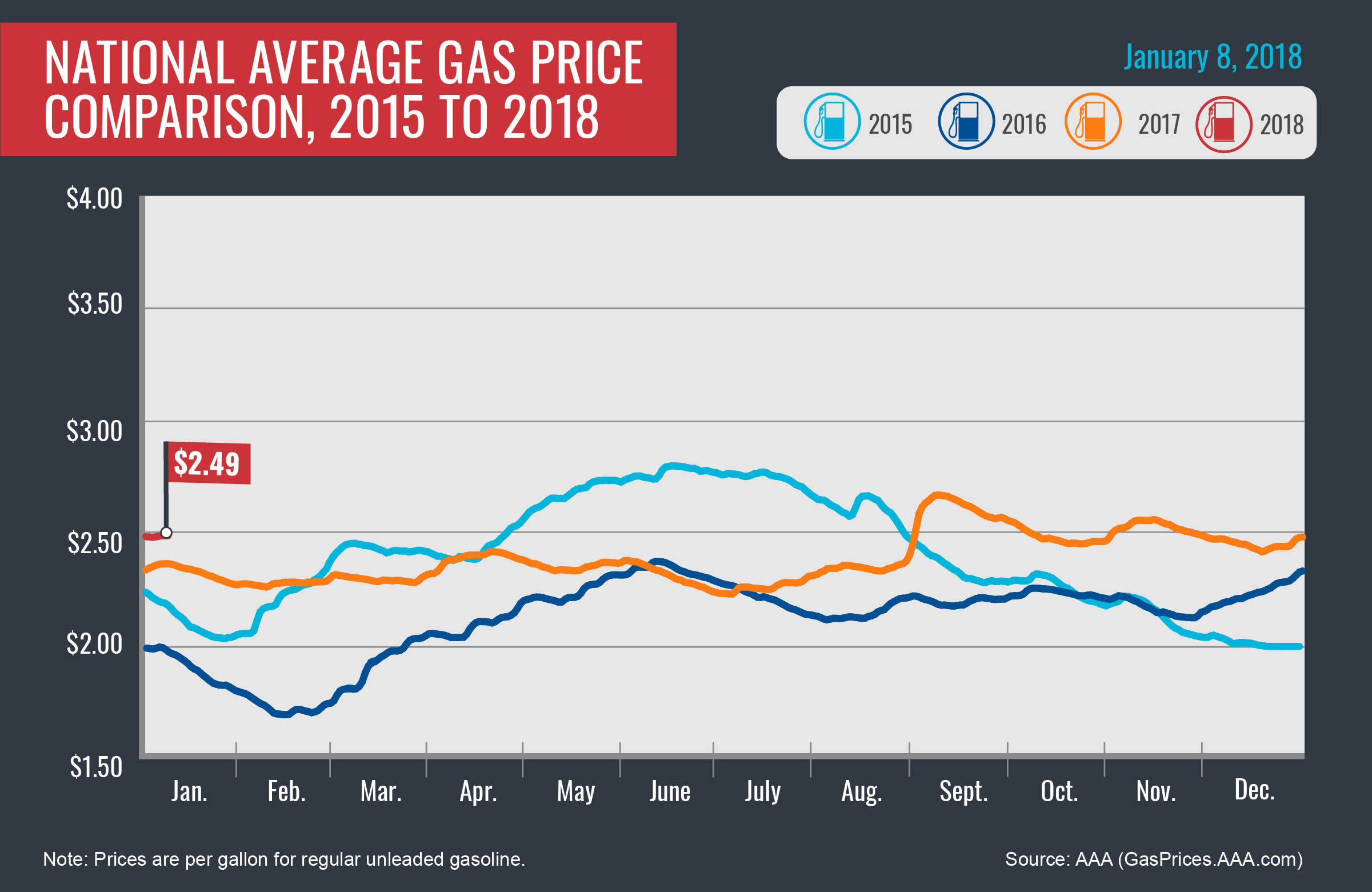 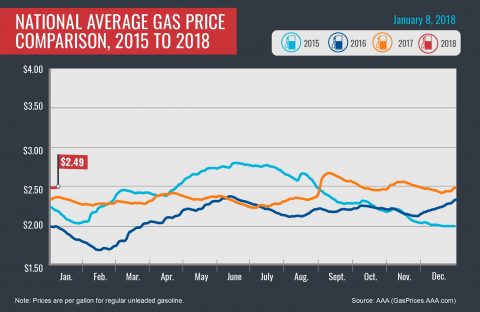 “On average, gas prices are 12 cents more expensive than a year ago. However, on the week consumer demand for gasoline decreased. If this continues, gas prices will decrease in the weeks ahead,” said Jeanette Casselano, AAA spokesperson.

Motorists can find gas for $2.50 or less at 64 percent of gas stations nationwide.

The Energy Information Administration’s (EIA) latest petroleum status report (for the week ending on December 29th) found that gasoline inventories measure near a 2-year high at 32.9 million bbl. Healthy refining output rates and increased gasoline imports are contributing to the high inventory volume, which has helped to keep prices in the region mostly stable on the week.

Pump prices are volatile across the Great Lakes and Central states with prices increasing as much as six cents and decreasing as much as three cents on the week. Motorists in Indiana (-10 cents), Ohio (-7 cents), Michigan (-6 cents), Kentucky (-4 cents) and Illinois (-2 cents) are the only ones in the region with reprieve at the pump.

Gasoline inventory increased alongside gas prices. The region added 2.7 million bbl. on the week, bringing the latest measurement total to 50.8 million bbl. According to the EIA, this is the largest one-week increase and highest supply levels the region has seen since end of September 2017.

Compared to one month ago, motorist in the South and Southeast are paying anywhere from four cents more to a one cent less at the pump, with the exception of New Mexico (-11 cents).

Gas prices are increasing by the day in the Mid-Atlantic and Northeast. On the week, price jumps range from six to one cent. Vermont (+5 cents) saw the largest jump in the region and the country. Washington, D.C. was the only state in the region to see prices decrease, albeit by one cent.

Similar to this time last year, four states have among the top 10 most expensive gas price averages in the country. In fact, gas prices in these states are as much as 17 cents more expensive at the start of 2018: Connecticut (+17 cents), Washington, D.C. (+12 cents), New York (+12 cents) and Pennsylvania (+11 cents).

After two weeks of draws, gasoline inventories built by 82,000 bbl. to keep the total inventory above 7 million bbl.

At the close of Friday’s formal trading session on the NYMEX, WTI decreased 57 cents to settle at $61.44.

Although the market dropped slightly last week, end of the year gains were significant according to the EIA. Among the 2017 U.S. crude highlights were:

These facts have given the market greater optimism about the potential of prices continuing to climb in 2018, as OPEC’s agreement to reduce production will remain in effect through the end of this year and will help to restrain growing inventories.

However, growing U.S. production amid higher global demand growth has given some pause to these optimistic market observations. U.S. production rates in coming months will give a clearer picture. The latest weekly active rig count report from Baker Hughes, Inc. found the U.S. dropped by five rigs to land at 742.