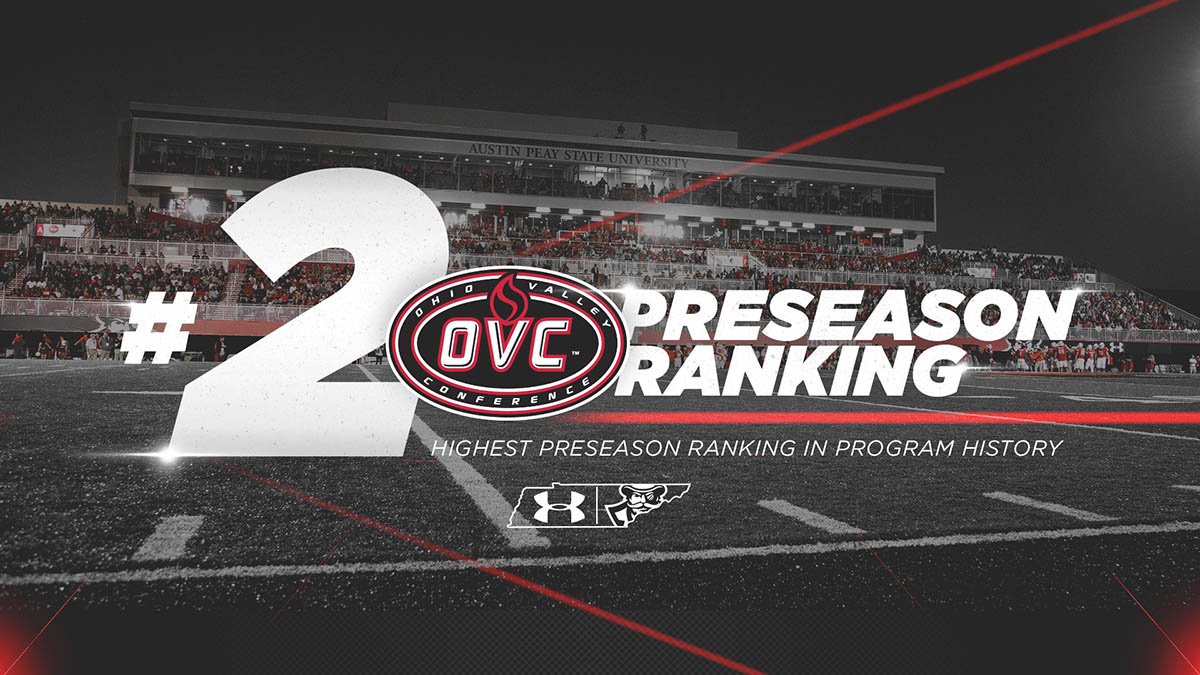 Nashville, TN – The APSU football team was picked to finish second in the Ohio Valley Conference by the league’s coaches and sports information directors, the OVC announced at its annual Media Day, Monday.

The Austin Peay State University Governors enter the 2018 season with a tremendous amount of momentum after posting one of the greatest turnaround seasons in FBS history in 2017. 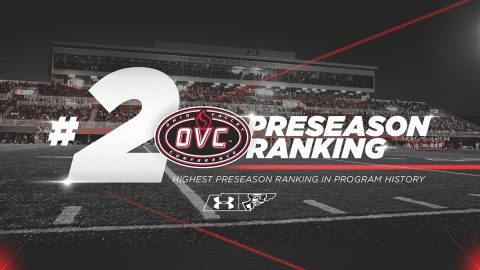 The Govs won eight games a season ago, including seven victories in OVC play, the most conference victories in program history.

They finished the season second in the OVC, which was the program’s highest finish in conference play since tying for second in 1980.

Head coach Will Healy is in his third year at the helm of the program, and his efforts in turning around the program did not go unnoticed. Healy took home the STATS FCS Eddie Robinson Award as the top coach in FCS, as well as the OVC Roy Kidd Coach of the Year Award.

Healy’s background in quarterback development showed through with the emergence of Jeremiah Oatsvall in his freshman season. Oatsvall demonstrated efficiency through the air and made plays with his legs to become a true dual-threat option. The media tabbed Oatsvall as its Preseason OVC Offensive Player of the Year, Friday.

On the defensive side of the ball, All-American defensive end Jaison Williams returns after posting 9.5 sacks and four forced fumbles a year ago. Also returning is fellow 2017 first-team All-OVC selection Gunnar Scholato at linebacker, who has led the Govs in tackles each of the past two seasons.

The secondary will have to replace the production of the departed Malik Boynton, but a number of talented defensive backs return, including Malik Davis and Juantarius Bryant, who finished third and fourth, respectively, in total tackles a season ago.

The Govs open the season on September 1st in Athens, GA, against the reigning SEC Champion Georgia Bulldogs in a 2:30pm contest on ESPN.

The home opener at Fortera Stadium will take place the following weekend, September 8th, at 6:00pm, and the final non-conference matchup will be at Morehead State on September 15th.

The Govs open OVC play at UT Martin on September 22nd, and will travel to Jacksonville State on September 29th. After a long road trip, the Govs return home on October 6th for Family Weekend against Tennessee State, followed by a road trip to Southeast Missouri on October 13th.

After a bye week, Austin Peay returns to action for homecoming on October 27th against Tennessee Tech, followed by another home contest against Eastern Kentucky on November 3rd. The season wraps up with a trip to Eastern Illinois on November 10th and Military Appreciation Day at home against Murray State on November 17th.

Additionally, College Football America 2018 Yearbook has Austin Peay tabbed as the No. 16 team in FCS in its Top 30 poll released on Sunday.

Season tickets for Austin Peay’s five-game home schedule remain available. Reserved seating is available today and may be purchased by contacting the APSU Athletics Ticket office by phone at 931.221.PEAY [7329] or online at LetsGoPeay.com/SportTix. Fans interested in joining the waiting list for club seating should visit wwww.LetsGoPeay.com/Tickets