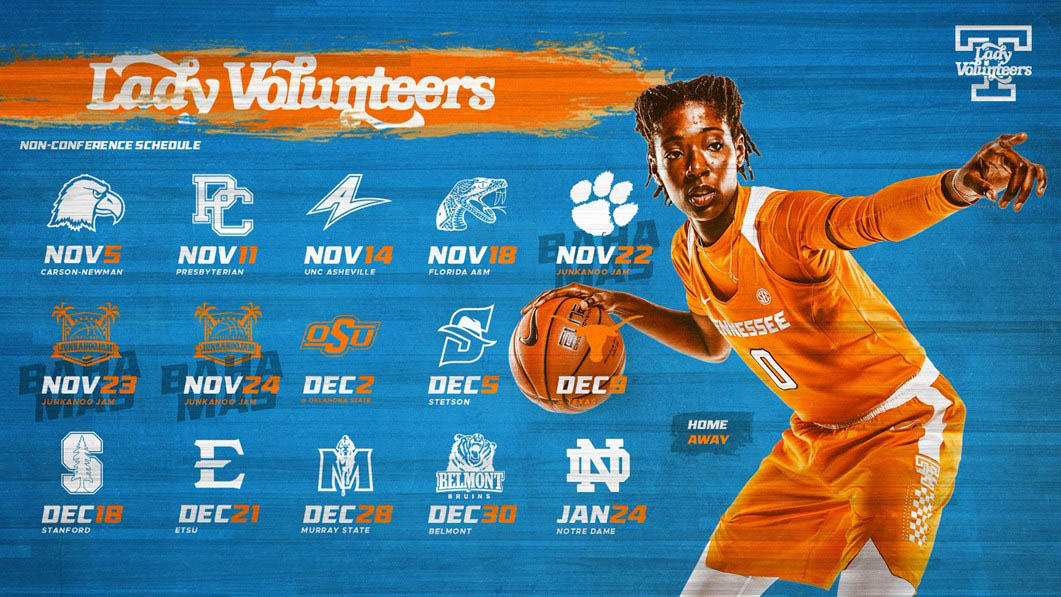 Knoxville, TN – The Tennessee women’s basketball non-conference schedule has been been approved for release, and the Lady Vols’ out-of-league slate is highlighted by visits from defending national champion Notre Dame and perennial power Stanford, a road test at Texas, as well as two early-season tournament games in the Bahamas.

Tip times and television network assignments will be available at a later date when the information is approved for release. 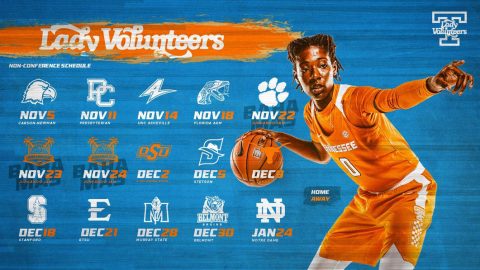 The Lady Vols, who are rated No. 9 in Charlie Crème’s espnW “Way Too Early Top 25 for next season,” return three starters and seven letterwinners for 2018-19.

In addition to returning the quartet comprising the consensus No. 1-ranked 2017 recruiting class, the Lady Vols welcome a 2018 freshman foursome that was rated No. 4 by both ProspectsNation.com and HoopGurlz/espnW. The 2018 unit includes 6-0 guard Zaay Green, 6-0 point guard Jazmine Massengill, 6-3 forward Mimi Collins and 6-1 wing Rae Burrell. Green, Massengill and Collins were McDonald’s and Jordan Brand Classic All-Americans, and Collins was a top-five finalist for Naismith Girls’ High School Player of the Year.

The 2018-19 non-conference slate features 14 possible opponents, with 10 of those foes seeing postseason action a year ago. Combined with the SEC teams Tennessee is scheduled to face, the Lady Vols will feature 17 of 29 contests against schools earning NCAA (13), WNIT (3) or WBI (1) berths last season.

Among the marquee out-of-conference match-ups, the itinerary includes home games vs. Stanford (December 18th) and Notre Dame (January 24th) and a December 9th contest at Texas. Combined with SEC showdowns at home vs. South Carolina and on the road at Mississippi State, the schedule provides Tennessee games against each of last year’s NCAA finalists (Notre Dame and Mississippi State) and four of the nation’s preseason top 10, according to Charlie Crème’s ESPN.com Way-Too-Early Top 25.

With eight members of Tennessee’s roster occupying either freshman or sophomore status, Holly Warlick‘s troops will take advantage of having the home crowd on their side for the November 5th exhibition game vs. 2018 NCAA Division II Elite Eight finisher Carson-Newman as well as in eight of the first 12 non-league contests.

UT will open the official schedule with a three-game home stand, featuring Presbyterian, UNC Asheville and Florida A&M on November 11th, 14th and 18th. UNCA participated in the Women’s Basketball Invitational a year ago, losing in the first round. FAMU is the only team of that trio that the Lady Vols have previously faced, falling to the Big Orange in Knoxville during the 1995 NCAA Tournament, 96-59.

Just as they did a year ago, the Lady Vols will head somewhere tropical after their opening three-game set. This time, UT will venture to the Bahamas to take part in the Junkanoo Jam at Resorts World Bimini. The Lucaya Division champions at the 2013 Junkanoo Jam in Freeport, Bahamas, Tennessee will open play on November 22nd vs. Clemson at 3:00pm ET in the Junkanoo Division bracket. The winner will play either Oklahoma or UAB at 2:00pm on November 24th. The losers of the opening games will meet on November 23rd at 7:45pm. OU (NCAA First Round) and UAB (WNIT Second Round) are coming off postseason appearances.

For the second year in a row, Tennessee and Oklahoma State will meet. The Lady Vols, who defeated the Cowgirls in the Cancun Challenge last November, 79-69, will travel to Stillwater for their first-ever visit to Gallagher-Iba Arena on December 2nd as part of the SEC/Big 12 Challenge. OSU advanced to the NCAA Second Round in 2018 and tied for third in the Big 12 with in-state rival Oklahoma.

After playing host to Stetson, a WBI participant last season, on December 5th, the Lady Vols will travel to Austin to take on perennial NCAA tourney team Texas on December 9th. The Lady Vols defeated a No. 2/4-ranked Longhorns squad last December in Knoxville, 82-75.

Tennessee will return home and host a string of four games at Thompson-Boling Arena, including two before the holiday break and two afterward. A week after playing at Texas, the Lady Vols welcome NCAA power Stanford to Knoxville for a December 18th contest. UT has won three of its last four over the Cardinal, including the program’s first victory at Maples Pavilion since 2005 last December 21st.

The annual contest with Notre Dame closes out the non-conference portion of the regular-season schedule on January 24th. The Lady Vols won two years ago in Knoxville and led the Irish on the road last season before dropping the contest to the eventual national champions.

The Southeastern Conference portion of Tennessee’s schedule is expected to be released in late August.

Season tickets go on sale in early September, and single-game tickets will be available in October. Fans interested in purchasing tickets are encouraged to visit AllVols.com or call 1.800.332.8657.