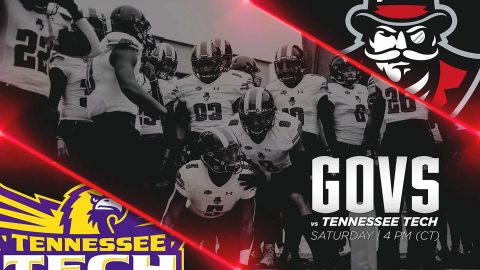 The Govs defeated Presbyterian and Tennessee State in the first two home games this season. With a victory, the Governors will have their first five-game home win streak since 1980-81.

Austin Peay has scored three Homecoming victories against TTU over the years, tied for the most against any opponent with Middle Tennessee and Murray State.

The game against the Golden Eagles is also the final contest for the Govs in their quest to repeat as Sgt. York Trophy champions. APSU fell to UT Martin and defeated TSU earlier this season, while TSU is coming off of a victory against TTU last week. UT Martin still has matchups with TSU and TTU on the horizon.

The Govs continue to be one of the nation’s most electric teams in the run game, rushing for more than 240 yards per game. The Govs lead the Ohio Valley Conference in rushing yards per game, and rank second with 19 rushing touchdowns on the year, trailing only Jacksonville State.

Quarterback Jeremiah Oatsvall has featured heavily in the run game as well as the passing game, as he is the only player in the top 10 in the OVC in passing yards per game (128.6, eighth) and rushing yards per game (49.0, ninth).

Defensively, the Govs have intercepted at least one pass in each of the past six games, and have forced at least one turnover in every game this season. They rank second in the OVC and 29th nationally with a plus-3 turnover margin.

Head coach Will Healy said despite the Golden Eagles’ record, the Governors will need to be ready for a fight, considering the parity seen throughout the OVC this season.

“Their kids are still competing and playing, and schematically, I think they’re giving themselves a chance,” Healy said. “I think they’re playing some young guys and saying, ‘We’re going to build this thing for the future.’ They’ll be prepared, ready to play, and they’ve got nothing to lose.”

With 226 yards rushing at SEMO, the Governors eclipsed the 200-yard mark for the fourth time this season. They rank first in the OVC and 15th in the FCS in rushing yards, averaging 241.9 per game. After rushing for two touchdowns against SEMO, the Govs are tied for 13th in the FCS with 19 rushing touchdowns on the season.

The Govs have forced a turnover in every game in 2018 after Malik Davis picked off a first-quarter pass against SEMO to continue the streak. The defense has recorded at least one turnover in 10 straight games, dating back to 2017.

Defensive tackle Corey Brown Sr. has recorded at least 0.5 tackle for loss in each of the past five games, including 1.0 for loss in four of the five. His 4.5 tackles for loss this year eclipses his season total of 4.0 from 2017, accumulated in 12 games.

6.79 – Kentel Williams’ career 6.79 yards per carry average currently ranks first in the Austin Peay record book. He has rushed for 1,719 yards on 253 carries during his first three seasons.

10 – Linebacker Gunnar Scholato ranks second in the OVC and 15th nationally in total tackles, averaging 10 per game. He has recorded double-digit tackles in four games this season.

2.0 – The Govs held the OVC’s leading rusher, Marquis Terry of SEMO, to just 40 yards on 20 carries for a 2.0 yard per carry average. He entered the game averaging 9.4 yards per carry.