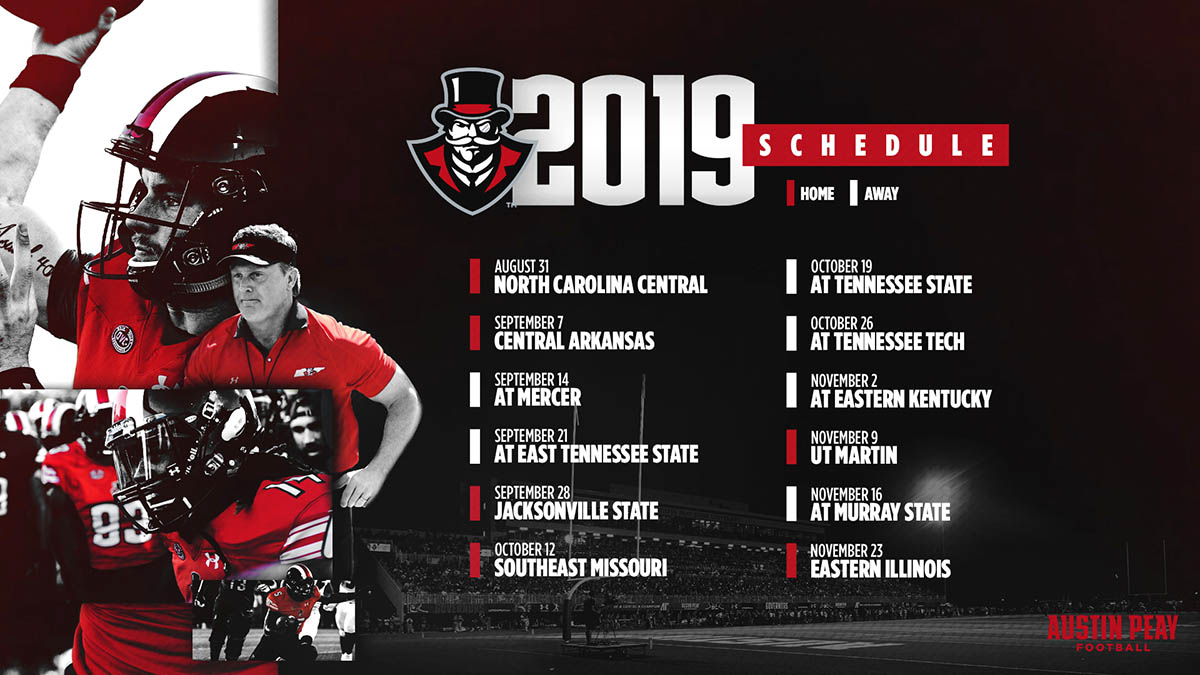 Clarksville, TN – For the first time since 2003, the Austin Peay State University (APSU) football team will host six home games at Fortera Stadium when it takes the field for the 2019 season, the first with head coach Mark Hudspeth at the helm. 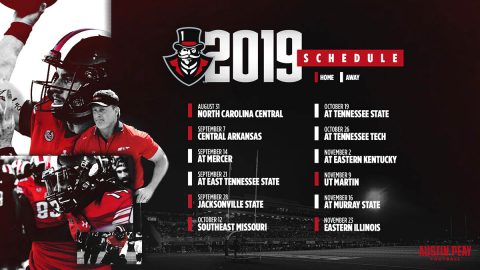 The 82nd season of Governors football is highlighted by matchups with three teams that made the 2018 FCS Playoffs: East Tennessee State in a non-conference matchup, as well as Jacksonville State and Southeast Missouri in Ohio Valley Conference competition.

The Govs open at home, August 31st, when they play host to North Carolina Central in the first meeting between the two programs. The Govs will stay home for Week 2 action, hosting Central Arkansas, September 7th in just the second all-time meeting with the Bears – UCA won the only previous meeting, 14-13, in 1975.

APSU will wrap up the non-conference portion of its schedule with two consecutive road games into the Eastern time zone. The Govs head to Mercer, September 14th, to face off with the Bears for the fourth time in the past six seasons.

The final non-conference tilt pits the Govs against former OVC foe ETSU, September 21st. It will be the first meeting between the two teams since 1978: the Govs and Buccaneers faced off annually from 1951 through 1978, with ETSU holding a slight 14-12-2 advantage, though the Govs won the final four meetings and were not defeated in the last six (5-0-1).

The quest to retain the Sgt. York Trophy, presented by Delta Dental of Tennessee, begins with the first two stops on a three-game road swing. APSU heads to Tennessee State, October 19th, followed by a trip to Tennessee Tech, October 26th. The road trip wraps up with a November 2nd contest at Eastern Kentucky.

The Govs final battle for the Sgt. York Trophy takes place November 9th against UT Martin, which also will serve as the Homecoming game at Fortera Stadium. It will be the fourth time the Govs face the Skyhawks for Homecoming, and the first since 2013. APSU owns a 2-1 advantage against UTM in Homecoming contests.

A trip to Murray State in the Heritage Bank Battle of the Border, November 16th, wraps up the road slate for the Govs. They will look to win three straight against their rival for the first time since winning five straight from 1964-68.

Game times and season ticket information will be announced at a later date.