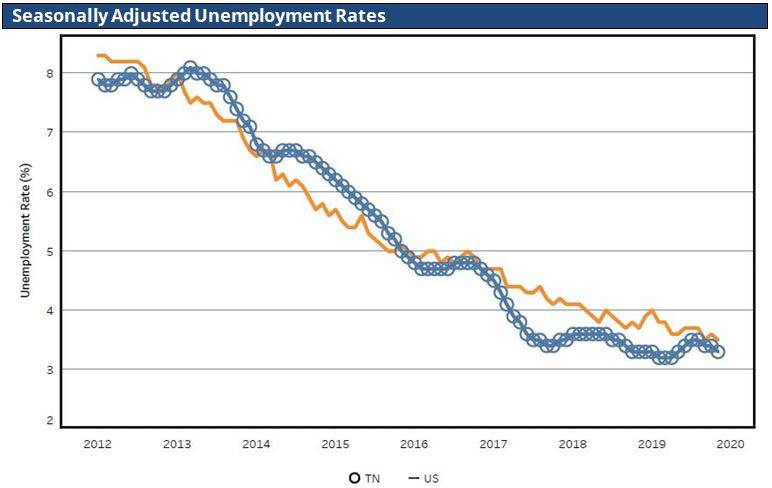 Nashville, TN – More Tennesseans took home paychecks in November, leading to a slight drop in statewide unemployment. New data from the Tennessee Department of Labor and Workforce Development (TDLWD) shows a 0.1 of a percentage point decrease in unemployment when compared to the previous month, setting the new rate at 3.3 percent. 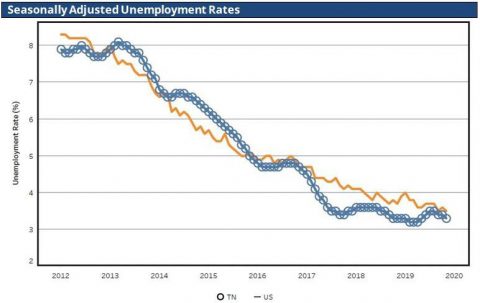 The current seasonally adjusted rate is close to the historically low unemployment rate Tennessee marked earlier this year. In February, the rate dropped to an all-time low of 3.2 percent and remained there for three consecutive months.

In a year to year comparison, Tennessee’s statewide unemployment rate mirrors the rate from November 2018.

“We’ve had a consistently low unemployment rate for nearly two years, which points to a healthy economy here in Tennessee,” said TDLWD Commissioner Jeff McCord. “While it’s good news that more people are going to work each day, for those who are not or for those who are looking for higher quality work, we have many services that can help them find meaningful employment.”

Tennessee employers added 9,200 new nonfarm jobs across the state between October and November. Companies in the manufacturing sector added the most new jobs, followed by the leisure/hospitality and education/health services sectors.

Over the last year, nonfarm employment in Tennessee increased by 46,700 jobs. The leisure/hospitality sector created the largest number of new jobs in the state, followed by the professional/business services and education/health services sectors.

Unemployment nationwide dropped in November. The United States’ seasonally adjusted unemployment rate is 3.5 percent, 0.1 of a percentage point lower than it was in October. Over the past year, nationally, unemployment declined fro, 3.7 percent to 3.5 percent.

A complete analysis of Tennessee’s November 2019 unemployment data can be found by following this link.

Tennesseeans looking for employment, or to change their current job situation, can access assistance and more than 198,000 current job openings through the state’s workforce development website, www.Jobs4TN.gov. They can also visit more than 80 local American Job Centers across the state.