Tampa, FL – The national gas price average is $2.47, which is four cents cheaper than last week and 11 cents cheaper than the beginning of the year. Motorists are paying less to fill up especially as crude oil prices are less expensive.

Motorists in at least a dozen states can find gas for less than $2.00/gallon. Those gas stations are mostly found in the South and Southeast. 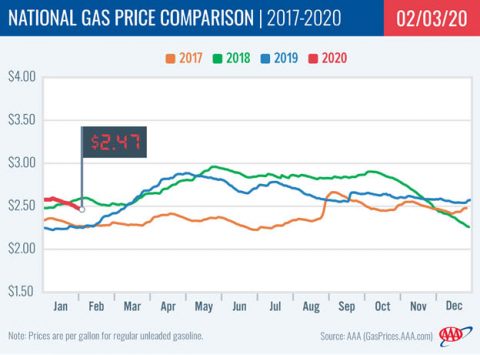 Gas prices are at least four cents cheaper across the Great Lakes and Central States except in Michigan (+4 cents), which is the only state in the country to see gas prices more expensive on the week. Despite the increase, Michigan’s average is 12 cents cheaper than last month.

Energy Information Administration (EIA) data shows that regional gasoline stocks drew by nearly 300,000 bbl. This is the region’s first decrease in stocks in more than two months, pushing total stocks to 57.9 million bbl. Motorists can expect gas prices to continue to decrease, although typical regional fluctuation is expected for some states including Ohio, Michigan, Kentucky and Illinois.

With an increase of 474,000 bbl, gasoline stocks built for a fourth week to bring regional levels to 95.7 million bbl. This pushes regional stocks to a new all-time record according to EIA data. In the next week, we can expect to see an increase in the amount of stations selling gas at less than $2.00/gallon. 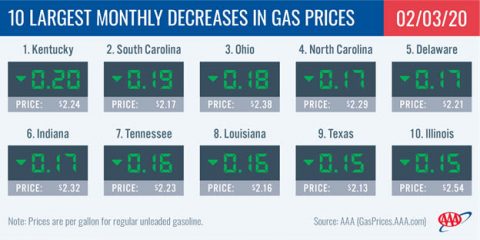 Gas prices are cheaper on the week and month across all states in the Mid-Atlantic and Northeast region. On the week, gas prices are as much as six cents cheaper. On the month, two states land on the top 10 list for largest change at -17 cents: Delaware and North Carolina.

Gasoline stocks in the region have increased since the end of last year and currently sit at 66 million bbl. According to EIA data, stock levels have not been this high since last February. Motorists in the region can expect gas prices to push even cheaper in the weeks ahead.

According to EIA’s latest weekly report, total gas stocks in the region increased by 100,000 bbl to 32.5 million bbl. The current supply level is approximately 300,000 bbl lower than 2019’s level at this time. Pump prices are expected to decrease this week, as winter demand remains low amid the current stock level. 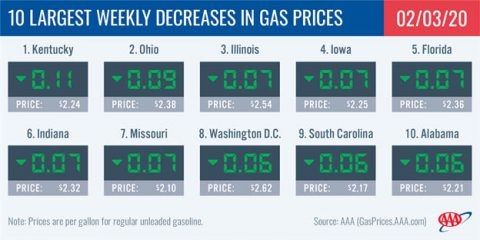 Gasoline stocks sit at 8.9 million bbl – a record-breaker for region, according to EIA data. With demand expected to be lower in the region during the winter, motorists can expect gas prices to be even cheaper throughout this month.

At the close of Friday’s formal trading session on the NYMEX, WTI dropped by 58 cents to settle at $51.56. For the second week, crude prices have decreased as a result of increased market concerns regarding the growing impact of the coronavirus on global travel.