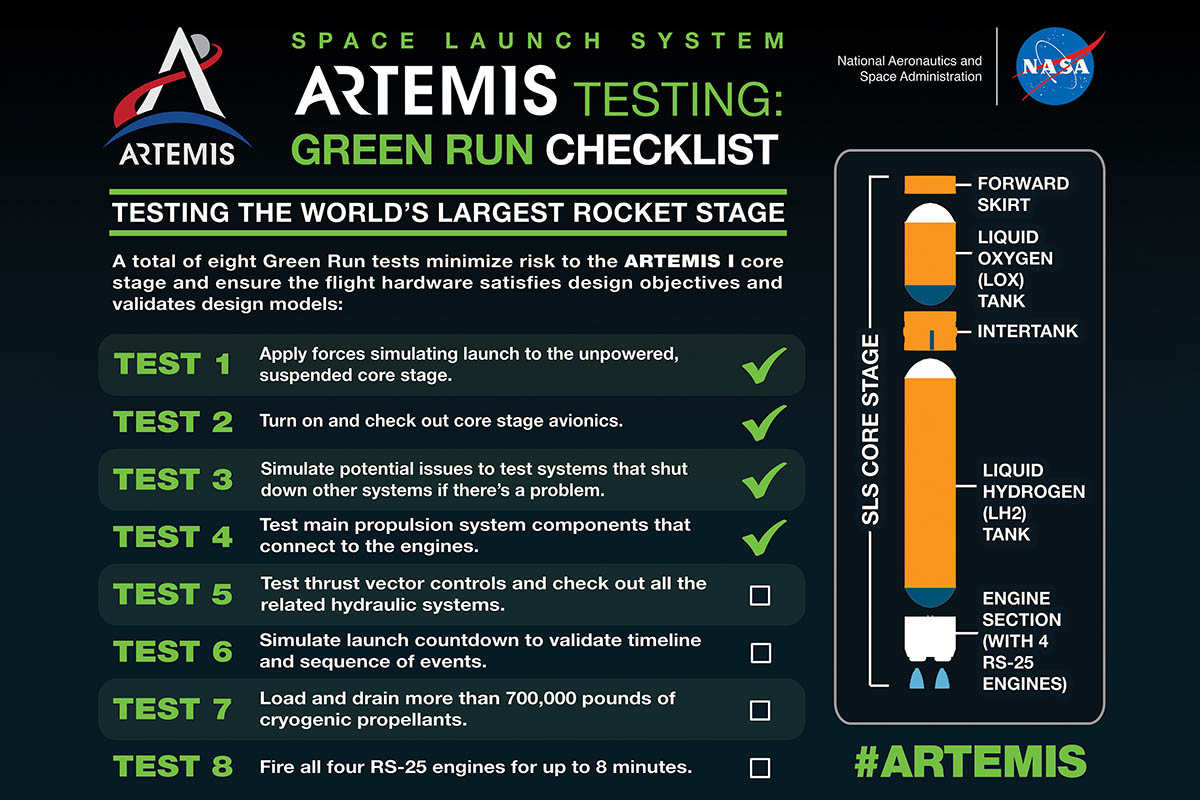 Huntsville, AL – The Space Launch System (SLS) rocket core stage for the Artemis I lunar mission has successfully completed its first four Green Run tests and is building on those tests for the next phase of checkout as engineers require more capability of the hardware before hot-firing the stage and its four powerful engines.

Green Run is a demanding series of eight tests and nearly 30 firsts: first loading of the propellant tanks, first flow through the propellant feed systems, first firing of all four engines, and first exposure of the stage to the vibrations and temperatures of launch.

“We are methodically bringing several complex systems to life and checking them out during the first seven tests,” explained SLS Stages Manager Julie Bassler. “Then it is show time for the eighth test when we put it all together and fire up the rocket’s core stage, just like we’ll fire it up for the Artemis I launch to the Moon.”

On August 5th, engineers at NASA’s Stennis Space Center near Bay St Louis, Mississippi, where the stage is loaded into the B-2 Test Stand, completed the fourth of eight planned tests of the 212-foot-tall core stage. 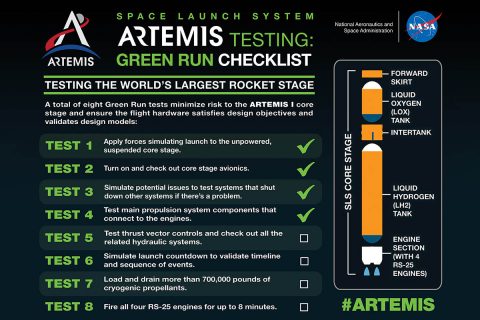 “With test gases flowing through this many parts of a complex rocket stage, we expected the test team to encounter some issues,” said Jonathan Looser, who manages the SLS core stage main propulsion system.

“Historically, there’s never been a NASA human-rated launch vehicle flown without one or more full-up tests before flight, and they have all encountered first-time issues. As expected, we found a few with valves and seals and addressed them, and now we’re ready to complete the next four Green Run tests,” Looser stated.


The Green Run testing series formally started in January with modal testing to verify computer models and support guidance and navigation control systems. In March, the test series was interrupted by a shutdown related to COVID-19 Coronavirus cases in Mississippi.

When testing resumed in May with appropriate safety measures in place, the team completed Test 2, activation of computers, data collection health monitoring and other “avionics” that make up the brains and nervous system of the core stage. Test 3 was a check of the fail-safe systems that shut down the stage in a contingency situation. Each test builds on the prior test and is longer than the previous one, adding new hardware activations to those already completed.

For Test 4, functional and leak checks of the stage main propulsion systems and engines lasted three weeks. Engineers were able to conduct the test with gaseous nitrogen and helium, which is more efficient than using liquid hydrogen and oxygen propellants, which are only needed for the actual hot-fire test.  As these gases flowed through systems, special instrumentation monitored for any leaks or poor connections.

Next up for the Green Run team is Test 5. It will ensure the stage thrust vector control system works correctly, which includes huge components that steer the four RS-25 engines, called actuators, and provides hydraulics to the engine valves.

Test 6 simulates the launch countdown to validate the countdown timeline and sequence of events. This includes the step-by-step fueling procedures in addition to the previous test steps of powering on the avionics and simulated propellant loading and pressurization.

As one final checkout before the full firing test, Test 7 is called the “wet dress rehearsal,” meaning it builds on the simulations in Test 6 and includes fueling the rocket. After once again powering on the avionics, hydraulic systems, fail-safe systems, and other related systems that have been checked out in the prior six tests, the team will load, control, and drain more than 700,000 gallons of cryogenic, or super cold, propellants.


Only after passing these seven tests will it be time for Test 8, a full countdown and hot fire test for up to eight minutes. During the test, all four RS-25 engines will be firing at a full, combined 1.6 million pounds of thrust just as they will on the launch pad. Test 8 will be the final checkout to verify the stage is ready for launch. Afterward, engineers will prepare the stage for its trip to Kennedy Space Center in Florida.

“We want to find any issues here on the ground at Stennis, where we’ve added hundreds of special ground test sensors to the stage for Green Run,” said Ryan McKibben, one of the Stennis Green Run test conductors.  “We have great access to the stage on the B-2 Test Stand and have engineers and technicians on hand who are familiar with this stage.”

By the time all eight Green Run tests are complete, Boeing, the prime contractor for the core stage, estimates it will collect 75-100 terabytes of data, not including voice and video data collected. And that’s a lot of homework considering that all the data in the Library of Congress amounts to just 15 terabytes.

NASA is working to land the first woman and next man on the Moon by 2024. SLS and Orion, along with the human landing system and the Gateway in orbit around Moon, are NASA’s backbone for deep space exploration. SLS is the only rocket that can send Orion, astronauts and supplies to the Moon in a single mission.