Washington, D.C. – After weeks of seeing almost daily increases, the national gas price average is showing signs of stability, holding steady at $2.88 for the last 5 days.

“A dip in demand along with a simultaneous increase in supply and refinery utilization has contributed to the slower movement in gas price increases,” said Jeanette McGee, AAA spokesperson. “On the week, 32 states had increases of only 3 cents or less. This does not mean gas prices have hit their peak, but is a positive sign for consumers.”

In its latest weekly reports, the Energy Information Administration (EIA) shows demand decreased from 8.7 million b/d to 8.4 million b/d indicating that Americans are slowly returning to the road, likely due to more schools opening and spring break.

Further, supply increased from 231.6 million bbl to 232 million bbl. While still one of the lowest levels of 2021, the increase in supply is promising especially alongside increasing refinery utilization rates, which jumped from 69% to 76%. That is just 7 percentage points away from utilization levels before February’s Texas winter storm.

Further aiding the more modest jumps at the pump in the last week is the lower price of crude oil. Crude averaged around $63.00/bbl, down $2.00/bbl from the previous week’s average of $65.00/bbl.

In the week ahead, motorists can expect fluctuation at the pump. However, large jumps are not likely for the majority of consumers. 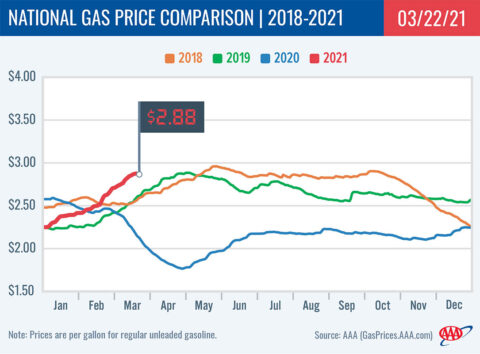 At the close of Friday’s formal trading session, WTI increased by $1.42 cents to settle at $61.42. Although the price of crude increased (Friday) after Saudi Arabia reported a drone attack on an oil facility that caused a fire but no injuries or damage, crude prices declined on the week due to market concern that demand may stumble as some countries restart coronavirus restrictions to curb growing infection rates.


The decrease in crude prices was also supported by EIA reporting that total crude inventories increased by 2.4 million bbl to 500.8 million bbl. For this week, crude prices may decline further if demand concerns persist.

Motorists can find current gas prices along their route with the free AAA Mobile app for iPhone, iPad, and Android. The app can also be used to map a route, find discounts, book a hotel and access AAA roadside assistance. Learn more at AAA.com/mobile

The Auto Club Group (ACG) is the second-largest AAA club in North America with more than 14 million members across 14 U.S. states, the province of Quebec and two U.S. territories. ACG and its affiliates provide members with roadside assistance, insurance products, banking, and financial services, travel offerings, and more.