HomeSportsAPSU Women's Basketball is on the road Thursday to take on UNC...
Sports 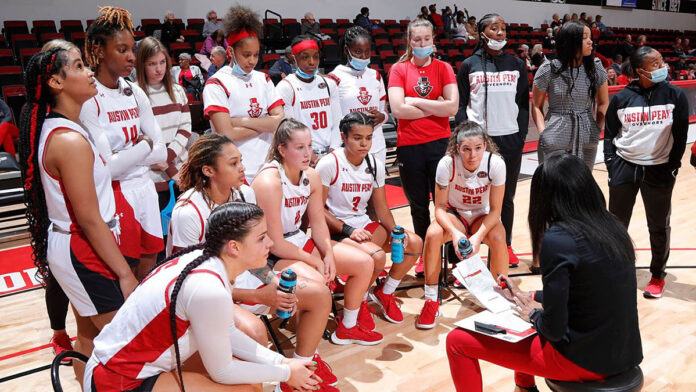 Clarksville, TN – For the first time since the 2008-09 season, Austin Peay State University (APSU) women’s basketball will take the court in the Tar Heel State when it plays a Thursday game against UNC Asheville at Kimmel Arena in Asheville, North Carolina.

Last time out, Austin Peay State University picked up a wire-to-wire 67-54 win over Bellarmine in the Winfield Dunn Center. The Governors are 1-1 in road games this season, with their lone road win coming against Butler, November 20th, in Hinkle Fieldhouse in Indianapolis.

UNC Asheville dropped its last outing at North Carolina, 107-46, but the Bulldogs are 1-1 at home and beat Warren Wilson, 100-36, in their last game at Kimmel Arena.

Thursday’s game against UNC Asheville will be streamed on ESPN+ and will be broadcast locally in Asheville on CW6.

About the UNC Asheville Bulldogs

After a sixth-place finish in the 2020-21 regular season, UNC Asheville fell to third-seeded Longwood in the quarterfinals of the 2021 Big South Women’s Basketball Championship. This season, UNC Asheville was picked to finish tied for seventh in the 2021-22 Big South Preseason Poll. Under second-year head coach Honey Brown, the Bulldogs are off to a 5-4 start this season with road wins at Western Carolina, Wofford, and ETSU.

UNC Asheville is led by 2020-21 First Team All-Big South and 2021-22 Preseason All-Big South selection Nadiria Evans. The 5-8, Fifth Year guard is averaging 20 points per game, which ranks 19th in the NCAA and leads the Big South in scoring this season. Evans also ranks sixth in the conference in rebounding (6.8 rpg), ninth in assists (2.5 apg), and eighth in field-goal percentage (.451).

Evans has scored 20-plus points in five of the eight games she has appeared in this season and posted a 20-point, 10-rebound double-double at Wofford, November 23rd. The Florida native also scored a season-high 31 points at both Western Carolina, November 12th, and East Tennessee State, December 10th.

Averaging 12.1 points and 5.3 per game, Carter Kai is the Bulldogs’ second-leading scorer and rebounder. The junior forward has knocked down a team-best 11 three-pointers, but she is shooting just 25.6 percent from three-point range.

Asheville native and Austin Peay State University senior Kasey Kidwell is playing her first collegiate game in her home state. Kidwell graduated from Carolina Day School in 2018 and has spent all four college seasons in Clarksville.

Yamia Johnson and Karle Pace are averaging 15.0 and 13.3 points per game, respectively, the duo ranks fifth and ninth in the OVC in scoring this season.

Nina De Leon Negron is one of two OVC players that ranks in the top six in the league in both assists (3.6 apg) and steals (2.1 spg) this season.

Ella Sawyer dished out a career-high eight assists against Bellarmine, she is now tied for eighth in the OVC in assists (3.1 apg) and ranks fifth in assist-to-turnover ratio (1.5).

For up-to-date news and information on Austin Peay State University Athletics, check back at LetsGoPeay.com or follow along on Facebook. To keep up with the Governors women’s basketball team, follow along on Twitter and Instagram (@GovsWBB). Live stats will be available during all home games and select road games at PeayStats.com.


In addition, all Austin Peay State University home games, OVC games, and select road games will be broadcast on ESPN+ this season, visit the APSU women’s basketball schedule at LetsGoPeay.com for a complete broadcast schedule.

The APSU Govs then return home for their final game before Christmas when they host UT Southern for a 2:00pm, December 21st contest in the Dunn Center.