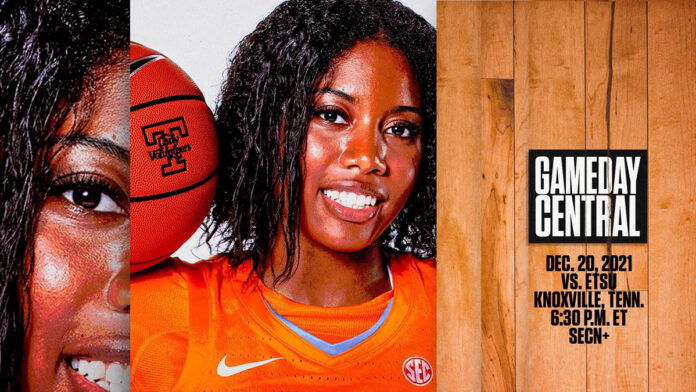 Knoxville, TN – In-state foes No. 7/9 Tennessee (9-1) and East Tennessee State (1-10) will face one another on Monday, meeting for the seventh consecutive season and for the 28th time in the series.

The Lady Vols and Buccaneers are set to tip-off at 5:32pm CT Monday in Thompson-Boling Arena in a contest that will mark the final competition before the holiday break for the Big Orange.

The battle marks the third of five consecutive home games during the month of December for UT and the first of two straight match-ups against schools within the Volunteer State.

Tennessee enters Monday night’s test after losing a top-10 clash with No. 3/3 Stanford on Saturday evening, 74-63, in Knoxville before a season-best crowd of 10,017. The setback to the Cardinal ended Kellie Harper‘s finest start in 18 years as a head coach. It also halted UT’s best season-opening run since 2017-18 as well as a 10-game home winning streak that dated back to January 24th, 2021.

ETSU, meanwhile, comes to Knoxville bearing the weight of an eight-game losing skid and 1-10 overall record under first-year head coach Simon Harris. The Buccaneers’ most recent contest saw them drop a 61-48 decision at Jacksonville State on Thursday night.

Bob Kesling (play-by-play), Madison Blevins Hock (analyst) and Kasey Funderburg (reporter) will be on the call for the SECN+ broadcast.

For additional details and information, please call 865-974-1734 or visit the Fans tab on UTSports.com and click on the Fan Experience link.

The Tennessee women are 253-61-1 all-time vs. four-year college teams from the Volunteer State, and Kellie Harper is 8-0 in those match-ups in her third season on Rocky Top.

The Lady Vols are 1-0 this season (W vs. Tenn. Tech) and were 3-0 in 2020-21, with wins over ETSU, Lipscomb, and Middle Tennessee, with two games on the schedule vs. Vanderbilt (home and away) canceled.

UT has won eight in a row over schools from within the state border and 24 of the last 25, with the lone setback during that run being a 76-69 loss to Vanderbilt in Knoxville on February 28th, 2019.

About the Tennessee Lady Vols Basketball

The Lady Vols are one of the nation’s biggest stories of 2021-22, opening up at 9-1 against one of the NCAA’s toughest schedules despite losing returning starters Rae Burrell and Marta Suárez to injuries and opening the season with Jordan Horston on the sideline for a game.

Tennessee is among the nation’s best at rebounding and defending, but its offense is emerging with different members of the team stepping up each game.

Eight different players have scored in double figures this season, including seven who have done so in multiple games.

The Lady Vols have had at least one player record a double-double in every game through the contest with Stanford, led by Tamari Key with six (including a triple-double) and Jordan Horston with five.

UT has shown itself to be a tough, gritty team, coming from behind in the fourth quarter four times this season to win games (Southern Illinois, South Florida, Texas, Virginia Tech). UT also came from 20-down in the second quarter vs. No. 3/3 Stanford, cutting the deficit to three in the second half with a 17-0 run spanning the second and third periods before eventually falling to the Cardinal.

Alexus Dye, a 6-0 forward, is second among active UT players in scoring at 9.7 ppg. She is third in rebounding at 8.2 rpg.

Freshman point guard Brooklynn Miles is UT’s eighth active player averaging double-figure minutes at 22.8, and she was effective as a ball-handler and defender before becoming a scorer in game nine. She hit for a season-high 11 points vs. Georgia State on December 12th, hitting three of five field-goal attempts.

Tennessee leads the all-time series with the Buccaneers, 24-2-1.

Tennessee holds a 15-1 home record vs. ETSU, with the lone Buc victory coming in the first meeting at Knoxville in 1924.

The Lady Vols have a 7-1-1 record when playing at ETSU, winning their past seven games there. UT is 2-0 at neutral sites.

Kellie Harper‘s debut as head coach at Tennessee came on Nov. 5, 2019, with #RV/RV Tennessee escaping with a 72-68 victory in Johnson City.

Freshman Tamari Key came off the bench in that game to card 11 points, 12 rebounds, five blocks, and three assists in her college debut.

The Lady Vols are 67-20-1 all-time vs. schools from the Southern Conference. After facing ETSU, the Lady Vols will play host to another SoCon school, Chattanooga, on December 27th.

ETSU assistant Jackie Alexander was an assistant for UT’s Samantha Williams when Williams was head coach at EKU from 2019-21.


About The East Tennessee State Buccaneers

The Buccaneers come into Monday night’s game with a 1-10 record, dropping all seven of their road contests and scoring only 54.8 per contest.

Carly Hooks and Damiah Griffin are ETSU’s active leading scorers this season at 9.6 and 8.3 ppg. Jaila Roberts was putting up 11.9 ppg. but is no longer on the roster.

The Bucs are aggressive defensively, averaging 9.4 steals per game.

Simon Harris is in his first season at the helm at ETSU, becoming the ninth coach of the program.

Three of the four quarters saw a scoring differential of less than three, but the Bucs couldn’t hang on to the Gamecocks, falling 61-48 to Jacksonville State in Pete Mathews Coliseum on Thursday night.

Both teams scored 29 points in the final two quarters and the Gamecocks only held a three-point advantage including the first quarter, but Jacksonville State outscored the Bucs 17 to 7 in the middle ten minutes to take a lead and effectively ride it to the end.

The Blue and Gold saw a career game from Amaya Adams, who posted 19 points on eight of 14 shooting from the floor, two of three from deep, and added two boards, two assists, and three steals. The Bucs also got a double-digit performance from Abby Carrington, who added 11, nine of which came from beyond the arc.

Leading the conference in steals per game, the Bucs added another nine to their 2021-22 campaign, forcing 14 Jacksonville State turnovers, a team that ranked in the top 25 in turnover margin.

Tennessee (2-0) was led in scoring by Rae Burrell, who finished with 20 points on seven-of-11 shooting. Rennia Davis and Jordan Horston were also in double figures with 15 and 12, respectively.

Jakhyia Davis was the high scorer for the Bucs (1-1), finishing with 11 points and six rebounds.

Once More Before The Break

Tennessee is in a stretch where it plays five in a row at home during the month of December.

The Tennessee women’s basketball team will next play on December 27th at 5:30pm CT, as the players return from break with an in-state tilt with Chattanooga. The contest will be streamed on SECN+.

Alabama open will open SEC play vs. UT in Knoxville on December 30th at 5:30pm CT and close out the five-game run.