A somber rememberence of September 11th, kicks off the 22nd annual Riverfest 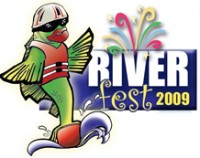 On a glorious September afternoon the 22nd annual Riverfest began. The weather simply could not have been better.

The annual Riverfest Festival recognizes the role  the two rivers passing through the heart of our town have played in the heritage of our city. At its heart the City of Clarksville will always be a river town, our lives affected by their timeless ebb and flow. One of the greatest things about Riverfest is how it draws us together, all walks of life intermingling,  and for a that moment at least we are one people.

The final day of Riverfest will be jammed packed with things to see and do, so come early, and bring the whole family to join in this amazing celebration of our culture and heritage!

For a complete list of activities see the schedule of events

At 5:00 pm it seemed as if the entire City of Clarksville paused for a moment to remember those who lost their lives on September 11th 2001. The City Honor Guard came on stage, made up of Police, Fire and Rescue, and members of the Sheriff’s Department. They carried two extra flags on this day, one each to honor the NYC Police and Fire Departments.

As the colors were presented, the 101st Airborne Division band kicked off with the Star Spangled Banner. As the last notes of the National Anthem sounded. Councilwoman Deanna McLaughlin began her heartfelt remembrance of that terrible day eight years ago. She continued by narrating a time line of the events that day, listing the number of casualties as each plane crashed, and as each building came tumbling down. She spoke of her certainty that our Country would be swift to take vengeance for the attacks, and how she knew that it would most likely involve her husband, a serving soldier in the U.S. Army. The crowd listened in respectful silence.

After Councilwoman McLaughlin concluded her remarks, the Fire Department’s Chaplin called for the crowd to pray. A prayer is a staple at city events, and today it  sought the blessings of God for those died securing the freedom our country enjoys, those who lost family members in the 9/11 attacks, and for our serving soldiers.

The prayer was followed by the sharp crack gunfire which echoed repeatedly between the banks of the Cumberland River,  as each of the three volleys in the twenty-one gun salute was fired. Soldiers, First responders, and ex-military members saluted as the crowd stood with hands reverently held over their hearts. Some members of the audience were moved to tears.

Things  you need to know

Be sure to bring your appetites as the food court features something for every one. Ranging from crispy golden funnel cakes to the biggest turkey drumsticks you have ever seen. Tickets for food and drinks are $1 each, and be sure to bring cash to purchase them with, cash is not accepted directly by the food vendors.

Parking is available at the Austin Peay State University, Dunn Center parking lot with free transportation down to the festival. Some Riverside Drive businesses may allow parking as well. Be sure to park only where you have been directly authorized to ensure your vehicle is still there when you return!

What is there to see and do

The River of Culture

Our local culture benefits from the people from all over our nation and the world that Fort Campbell to the North, and Austin Peay State University in the heart of our Historic Downtown area, brings in to our city, and is clearly reflected in groups showing their stuff in the River of Culture where you can find everything from demonstrations of the various Martial arts; to the exotic Ballet Folklorico Viva Panama, and will also feature the lithe gyrations of the Jezzebellies Dance Troupe, and the graceful Hui Hawaii O Tenesi Hawaiian Civic Club. In addition to their more exotic forms of dancing, local dance groups are also performing throughout the day if that is more suited to your tastes.

The Budweiser stage featured more mass appeal type acts including Highway 105, Mike Broward-Buffet, Chain Reaction, and American Floyd. Tommorow the stage will open with acts which will delight the younger members of the audience starting with a Magic show, followed the Nashville Zoo, and finishing up with Wake boarding for the teens. The Musical performances for the adults kick off at 1:15 pm with Sterling Heights, Dusty Mahan, and Stephanie Corbin.

The musicians will take a break starting at 4:30 pm for a contest which will feature local talent who will be trying their best to show the audience that they have what it takes to be the Beaver Country Idol! The contest is sponsored by the Beaver 100.3FM and Draughons Junior College. To show your support you are encouraged to make signs showing your support, and be sure to cheer as loud as you can for your favorite contestant.

The musical performances continue at 6:30 pm with The Pistols, followed by the hilarious Trailer Choir, and the Budweiser Stage closes out the night with the exceptional talent of Jack Ingram who was the winner of the the 2008 Academy of Country Music award for “Best New Male Vocalist

The Gateway Stage has been set aside primarily for religious acts, though on Saturday morning many of the local dance studios will be holding performing there. In addition to the dance performances at 1:00 pm the Gateway to Stardom talent competition will be held, followed by a Stepping competition from 3:00 pm till 4:00 pm.

Friday night featured the headlining Christian band Rush of Fools, along with performances by G Man, Jamie Worley, Xample Praise, and August Christopher. Tomorrow the music resumes at 4:15 pm, with Keisha Williams, Alfonz, Renay Ross, Atomic Blonde, Five Minus One, Stan Lassiter, and closing out the evening with the blues performed by Stacey Mitchart.

The Kids’ Zone is back this year and is packed with fun for the kids to enjoy. Visit Toddler Town, the area set aside just for the pint size visitors to Riverfest. The “bigger kids” can enjoy themselves too with inflatables for teens and adults.