Be A Part Of The Action 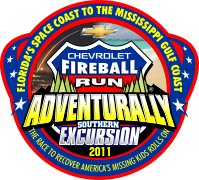 Clarksville, TN – On September 29th, Clarksville, TN will welcome 46 teams to town as part of a 2,500 mile Southeastern race and scavenger hunt that will benefit the local F.U.E.L. program. F.U.E.L. is a non-profit program that helps feed needy children whose only access to food is what they receive at school.

The Fireball Run Adventurally, sponsored by Chevrolet, will begin in Melbourne, FL on September 23rd and eventually reach their final destination in Gulfport, MS on October 1st.

Each participating team will be driving a unique car, ranging from Italian imports to pop-culture classics, such as the Delorean. The participants of the race are all high level executives, celebrities and there are even a few billionaires in there as well. Needless to say, these are people who want to use their wealth to promote a good cause, with each team being encouraged to donate at least 16 items to F.U.E.L.

Fireball Run also uses their status to aid in the recovery of missing children across America. Each team has been assigned a child from their home region and will distribute at least 1,000 posters along the route to help raise awareness to their cause. According to the race’s Web site, Fireball Run is the “country’s largest and longest ‘active recovery effort’ for missing and abducted children.”  Since the inception of the Adventurally in 2005, the race has helped to locate over 30 children.

The Clarksville-Montgomery County Convention and Visitors Bureau director, Theresa Harrington said, “this is an excellent opportunity to welcome people into the community who want to make a difference in the lives of our local children as well as, children across the country.”

“It also gives us the chance to promote the assets of our community to a new audience that we might not have reached in the past. We want as many people to come out and meet the participants, see the cars and be a part of the good thing that these teams are doing,” Harrington said.

If you want to catch a glimpse of (or maybe meet) NASCAR’s Daytona 500 winning Geoff Bodine or NASA Space Shuttle Astronaut, Winston Scott, then this might be your chance. The Adventurally will kick off at Public Square around 3:00pm on September 29th and then the teams will be off to hunt their first clue at Beachaven Winery. Over the course of the next three or four hours, the teams will be searching out clues at many of our famous landmarks. Each completed task earns the team a set number of points that will be added to their final score at the end of the Adventurally.

All teams will re-convene at Public Square for a community meet and greet at 6:00pm the night of September 29th. On the morning of September 30th, at 9:00am, the teams will line up at Public Square. When City of Clarksville Mayor, Kim McMillan, waves the custom made flag, the teams will be escorted out of town by city police officers and off to their next destination. Everyone is welcome to come to all the events and view the cars, meet the participants, seek out autographs and maybe even be a part of the Fireball Run movie.

The entire 2011 race will be filmed by the Fireball Run crew and edited down to a 60 minute movie that will be available online starting in the fall of 2012. But, if you want to catch the action along the way, the race will be streaming live on www.fireballrun.com and you can also follow along with the drivers by watching their GPS tracking.