When he arrived home, he found that his residence had been broken into and approximately $10,000 worth of property had been removed from his house.  It appears as though entry had been made through a window. 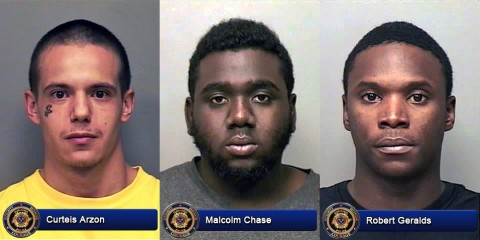 Mr. Garcia provided who he believed to be possible suspects in the burglary. He had advertised on Craigslist to get two iPods repaired.

On August 14th, a couple of men met him at his house in response to the ad and took the iPods with them. He paid them $40.00 in advance to complete the repairs.  He had interaction with the men over the next couple of days and the iPods were returned being deemed not repairable.

On the day of the burglary, the victim received phone calls from the men in reference to purchasing iPods to replace the damaged ones. He had told them he would not be at home and they needed to come the next day.

The investigation was turned over to Detective Eric Ewing who developed Curteis Arzon, Malcolm Chase, and Robert Geralds as suspects and uncovered the elaborate plan devised to commit the burglary.

The plan was to approach the victim, gain access to the residence under the guise of repairing the iPods, and then determine the type of property inside of the house. The suspects then contacted Garcia via a random phone number through the internet and ascertained he would not be home. Once it was established, Arzon, Chase, and Geralds broke into the residence and took the property.

Once the property was stolen, it was distributed through a network of fencing operations. At this point, Police have recovered a portion of the property.

Arzon was already on Probation until 2016 for Reckless Endangerment, Aggravated Assault, and Burglary.

Chase was already on Probation until 2014, Out of Kentucky for Burglary.