Program to Educate Teens on Importance of Buckling Up

Nashville, TN – Each year, dozens of Tennessee teens die in traffic crashes and many of those are not wearing safety belts. Traffic crashes are the leading cause of death for teenagers.

The Governor’s Highway Safety Office (GHSO) wants to help save lives by encouraging more teens to wear their safety belts. The GHSO is partnering with State Farm Insurance, Jackson Area Council on Alcoholism and Drug Dependency (JACOA) and four Tennessee high schools to sponsor a program called Click It AND Ticket. 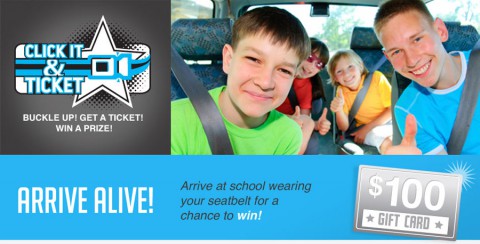 During the program, volunteers will conduct seat belt observations at the schools and students wearing their safety belts will be given a ticket to enter into a drawing to win a prize.

The penalty for not wearing a safety belt in Tennessee is $10.00, so volunteers will draw tickets and award $10.00 gift cards to students.

“Teens need to remember whether they are driving across town or just around the neighborhood, wearing safety belts is the absolute best way to protect themselves and their passengers from severe injury or even death,” Kendell Poole, Director of the GHSO, said. “Wearing your safety belt costs nothing, but not wearing it could cost you your life.”

In 2009, 56 percent of the teens in the U.S. who were killed in crashes were not wearing a seat belt according to the National Highway Traffic Safety Administration. Educating high school students about the importance of buckling up every trip, every time, is critical. The Click It AND Ticket initiative is a way to educate teens on the importance of wearing a seat belt.

Click It AND Ticket is sponsored by State Farm Insurance. To learn more about teen driver safety, visit our website at www.tntrafficsafety.org.