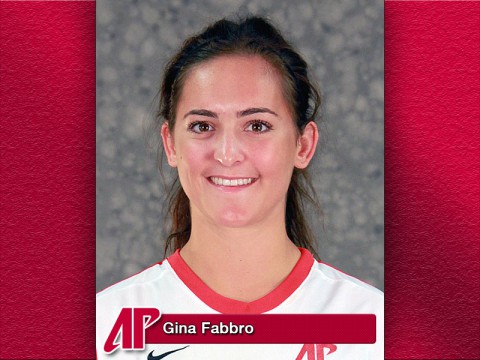 Fabbro earned Ohio Valley Conference Offensive Player of the Week honors after picking up her first career multi-goal game in Austin Peay’s comeback victory against St. Bonaventure, Friday. Fabbro tied the match in the 77th minute and scored the game winner, her conference-leading third game-winning goal, in the 88th minute.

The Coquitlam, British Columbia native is tied for second in the OVC with five goals. She earned Austin Peay’s first OVC Offensive Player of the Week honor since Emily Perkins won the October 30th, 2012 honor.

Senior Xiamar Richards, of the women’s cross-country team, earned a runnerup finish for the second week in a row at the Fleet Feet Sports Earl Jacoby Memorial, Saturday, hosted by Alabama-Huntsville, leading the Lady Govs to victory among Division I schools. Her 18:02.9 mark finished only behind Evansville’s Kelby Jenkins, a 2012 NCAA Cross-Country Championship participant.

Senior Rachel Deaton, of the women’s golf team, led the Lady Govs to a fourth-place finish at the Drake Creek Invitational, shooting a three-round 229 (78-77-74) to finish 10th overall.

Senior safety Leron Eaddy, of the football team, made seven tackles and picked off a pass in the Govs loss at Chattanooga, Saturday.

Junior defender Shelby Olszewski, of the women’s soccer team, netted her second goal of 2013 in the fourth minute at St. Bonaventure. She earned OVC Defensive Player of the Week honors for her efforts last week, her second weekly honor in 2013.