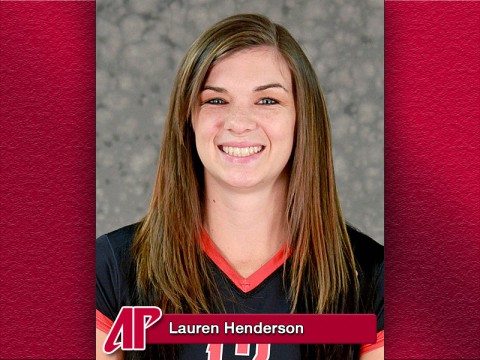 Henderson was a stud offensively and defensively for the Lady Govs last week. She led Austin Peay with a 15-kill, seven-block, two-ace performance in Saturday’s loss to Eastern Illinois. Her block total equaled her effort in Friday’s match against SIU Edwardsville, and she added nine kills against the Cougars.

The Fredericktown, MO, native is averaging 1.39 blocks per set during conference play which leads the Ohio Valley Conference. Her conference block total has accounted for 28 percent of her season’s block total and she ranks seventh overall in blocks (0.88 b/g, 82 blocks total).

Redshirt freshman tailback Omar Williams, of the football team, rushed for 122 yards on 25 carries (4.9 ypc), including a 46-yard scamper during the third quarter in Austin Peay’s homecoming loss to UT Martin. Williams now has two of Austin Peay’s three 100-yard games on the ground this season.

Senior Andy Quiceno, of the women’s soccer team, had a hand in all three Lady Gov goals in Sunday’s 3-0 win against Jacksonville State. She assisted on goals by Gina Fabbro and Tatiana Ariza before scoring her own in the 72nd minute.