Clarksville, TN – Freshman center Tearra Banks made an impact on the court during previous three games for the Austin Peay State University women’s basketball team and was rewarded as the Ohio Valley Conference’s Freshman of the Week, Tuesday.

Banks, of Louisville, KY, averaged 13 points and six rebounds in the last three games for Austin Peay. She began the week with a modest eight-point, two-rebound performance at Southern Illinois, last Tuesday. 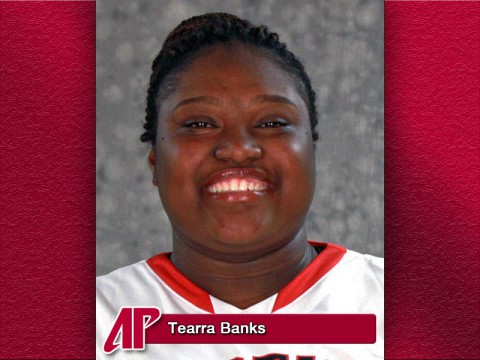 However, it was during the two games in the Dunn Center that Banks stood out. She posted a 14-point, 11-rebound double-double effort in Saturday’s loss to Arkansas State. It was the first double-double by an APSU freshman since 2007. Banks followed that with a team-best 17 points while grabbing five rebounds against Trevecca, Monday.

“I believe Tearra improved with each game she played last week,” said Lady Govs head coach Carrie Daniels. “She picked up her effort in practice and has worked hard to correct her mistakes. Tearra has seen what she can bring to this team with her presence in the post and that has seemed to motivate her. I believe this will be the first of many honors this season.”

It is the third time in the last five weeks (dating back to last season) and Austin Peay women’s basketball player has been named the league’s Freshman of the Week. Now sophomore Tiasha Gray received the honor in two of the final three weeks last season.