Instead of “Wichita Lineman” it easily could be titled “Austin Peay Linemen” as the Governors expect to bring some 17 new linemen to campus in 2015. 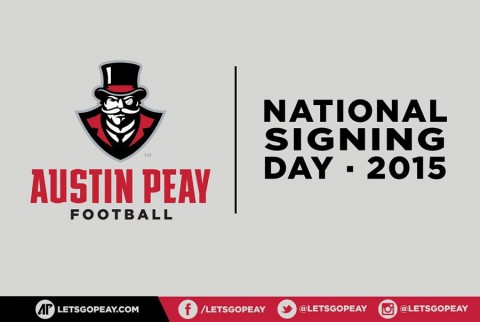 As many as 13 new linemen will be on the offensive side, including two junior college or prep academy transfers already here—the offensive line is an area that not only was hit hard by graduation this season but an area that lacked great depth in 2014.

“We lost nine scholarship offensive linemen in the last two graduating classes,” APSU coach Kirby Cannon said. “Just from a straight numbers standpoint we had to have a large offensive line class. We also wanted to recruit some guys that could play early so we don’t have that many projects in that group.

“We have brought in a few junior college lineman who I would think would get the first shot. That is what you expect from junior college kids. They are more mature in comparison to high school kids. Initially, they will fill a need for us and, hopefully, the high school kids will come along and compete for positions.”

The Govs struggled offensively a year ago and when injuries occurred those struggles swelled.

“It becomes apparent if you can run it and you can’t throw it, like what happened to us in our first five or six games, you know you need help,” Cannon said. “But when you look at our scholarship breakdown there just wasn’t enough scholarship players in that position. In our roster building we want to make sure we don’t have too many at any one position, but make sure we have enough to get the job done. We set numbers on each position and we are working towards those as we evolve.”

Defensively, the Govs added line depth both inside and at the ends.

“I always of been of that school that you recruit d-linemen until they are no other ones left,” Cannon said. “You see and recruit them and not put as much a numbers lid on that position.”

With a secondary that graduated three seniors, APSU also added depth to an areas that returns several second-year players. They also added additional linebacker depth to the defensive part of the class.

A year ago, the Govs thought they had a large enough running back stable but late in the season they were forced to move Rashaan Coleman back to running back. As a result, Austin Peay signed a pair of running backs.

With a host of young receivers returning, only one wideout was added to that group while the Govs also brought in just one quarterback candidate as Trey Taylor, Mickey Macius and Darrien Boone all return at that position.

“I think the best way to describe this class is it balanced,” Cannon said. “We filled the needs we had with young men who are academically strong. I think it is a class that demonstrates a year’s worth of work, a class that was nearly committed before campus visits.

“That is a tribute to the staff in their continued efforts during the season. We had 150 kids visit us during game days as compared to 15 the year before, which also can be greatly attributed to our new stadium and facilities. All that extra work and organization is done by your staff. I want to give them great credit for sustaining their work ethic during the year. It is a cycle that never really ends.”

Marvin Franklin
Running Back
5-10, 175
Brownstown, Mich.
Oscar A. Carlson HS
Played running back for Kent Sikora at Carlson High School…finished with 1,299 yards on 176 carries, 7.4 yards per carry…ran for 16 TDs…had outings of 198 and 191 rushing yards…selected all-conference…selected to the Daily News Herald All-Dream team.
http://www.hudl.com/athlete/1701492/highlights/192367380/v2

James Irwin
Offensive guard
6-4, 230
Clarksville, Tenn.
Rossview High School
Played offensive tackle and guard for Ron Lambert at Rossview High School… started every game since his freshman season for the Hawks…graded out at 85 percent in 35-of-40 career prep games…allowed only one sack as senior and was anchor of offensive line that had six 1,000-yard rushers in the last three years…chosen Class 6A All-State by the Tennessee Sports Writers Association…three-time Leaf-Chronicle All-Area team…two time all-district selection…also plays basketball at Rossview.
http://www.hudl.com/athlete/859960/highlights/220623389

Mykhael Sanford
Safety
5-10, 193
Daphne, Ala.
Daphne HS
Safety for Glenn Vickery at Daphne High School…credited with more than 110 tackles each of his three prep season…in 2014, had 91 solo stops in his 114 tackles…had 12.5 tackles for loss while forcing three fumbles and recovering one…intercepted one pass and broke up five others…as junior was credited with 122 tackles, including eight for loss….forced six fumbles and broke up eight passes…as sophomore tallied 143 tackles, including 72 solo stops…chosen second-team all-region as junior and senior…named first-team All-Baldwin county all three prep seasons…related to former LSU quarterback Jamarcus Russell and as well as former Tennessee signal caller  Condredge Holloway as well as former Alabama linebacker Tana Patrick.
http://www.hudl.com/athlete/1421806/highlights/158443380/v2

Arthur Williams
6-0, 230
Linebacker
Chicago. Ill.
Kernwood Academy
Defensive end and offensive guard for Darnell Jones at Kernwood Academy…as senior credited with 67 tackles, including 10 sacks…combined for 97 tackles during junior and sophomores season, including eight sacks in each season…selected all-league as junior and senior…listed on Mike Clark’s Top 100 Players in Chicago Area for 2014…multi-sport athlete also has competed in track and field, basketball and wrestling…won city championship in shot put a year ago….member of Core6 Athletes where he was named most improved a year ago.
https://www.youtube.com/watch?v=e31tsK5mD-M