Tampa, FL – Despite oil reaching its highest price of the year, the national average price for gasoline declined Sunday, for the first time since rising 27 cents during a period of 25 consecutive days. During that same time, price rose 30 cents in Georgia, and 28 cents in Florida and Tennessee.

U.S. gas prices are now exactly $1.00 cheaper than this time last year and motorists are saving an average of $15.00 on a full tank of gas. 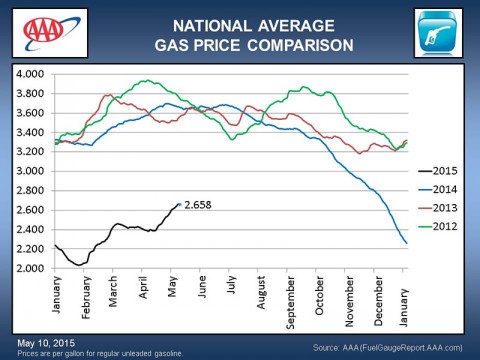 “This is great news for motorists who are shaping their Memorial Day travel plans,” said Mark Jenkins, spokesman, AAA – The Auto Club Group. “Typically it’s not the price during the holiday weekend, but gas prices in the weeks leading up to the holiday that have the biggest effect on motorists’ plans. Gas prices typically hit their yearly peak this time of year, but the price of oil has been on an upward trend for eight consecutive weeks, so gas prices may not hit their ceiling until oil prices find equilibrium.”

The recent price increase at the pump has been exacerbated by regional refinery issues, but is primarily the result of more expensive crude oil. The price of West Texas Intermediate crude has climbed since March and last week settled above $60.00 per barrel for the first time since December 10th. On that day in 2014, the national average price for a gallon of gasoline was $2.64. At the close of Friday’s formal trading on the NYMEX, WTI settled at $59.39 per barrel.

The increase in oil prices is the product of declining U.S. active rig counts, slowing U.S. oil production and a weaker U.S. dollar.

However, the surge in oil prices may not continue for long. Some market watchers are pointing to a global market that continues to be oversupplied, healthy production from OPEC countries, the potential for eased sanctions against Iran, and the ability for U.S. production to quickly restart should prices move back to profitable levels as all having potential to limit how much higher oil prices will rise.

Some analysts believe oil could stabilize at $65.00 a barrel in the next couple of weeks, which could incentivize an increase in domestic oil production which could drive oil and gasoline prices lower.

“Ultimately, high oil production should lead to lower gasoline prices throughout the summer, unless there are unexpected supply issues,” Jenkins said. “AAA remains confident that gasoline prices will not reach $3.00 a gallon this year.”