Gas prices should reach $2.00 a gallon by Christmas

Tampa, FL – Low gas prices influenced what AAA forecasts to be the most Labor Day motorists to take a road trip in seven years. The average price for gasoline was the lowest on the holiday in 11 years.

“These low gas prices likely influenced many Americans to take a last minute road trip,” said Mark Jenkins, spokesman, AAA – The Auto Club Group. “Motorists are saving between $15.00-$25.00 every time they go to the pump, and those savings could get even bigger. Labor Day marks the end of the busy summer travel season, which means gas demand will decline as fewer people take road trips. As a result, gas prices in the autumn and winter seasons could be the cheapest of the year.” 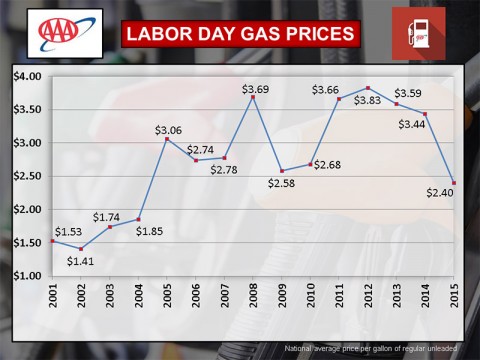 Gas prices are largely driven by the price of oil. After selling as low as $38 two weeks ago, the price of oil averaged $46.73 last week. That was the same price oil was selling at in January when state average gas prices were at the lowest point of the year of $2.07 in Florida, $1.99 in Georgia, and $1.88 in Tennessee.

“Oil prices remain low due to high domestic production and global supplies, a weakened Chinese economy, and the belief that Iran could soon introduce millions of barrels of oil per-day back into the market,” Jenkins said. “Gas prices have more room to fall in order to catch up with recent oil price declines. Unless oil prices suddenly surge, motorists should expect gasoline to reach $2.00 a gallon or below by Christmas.”