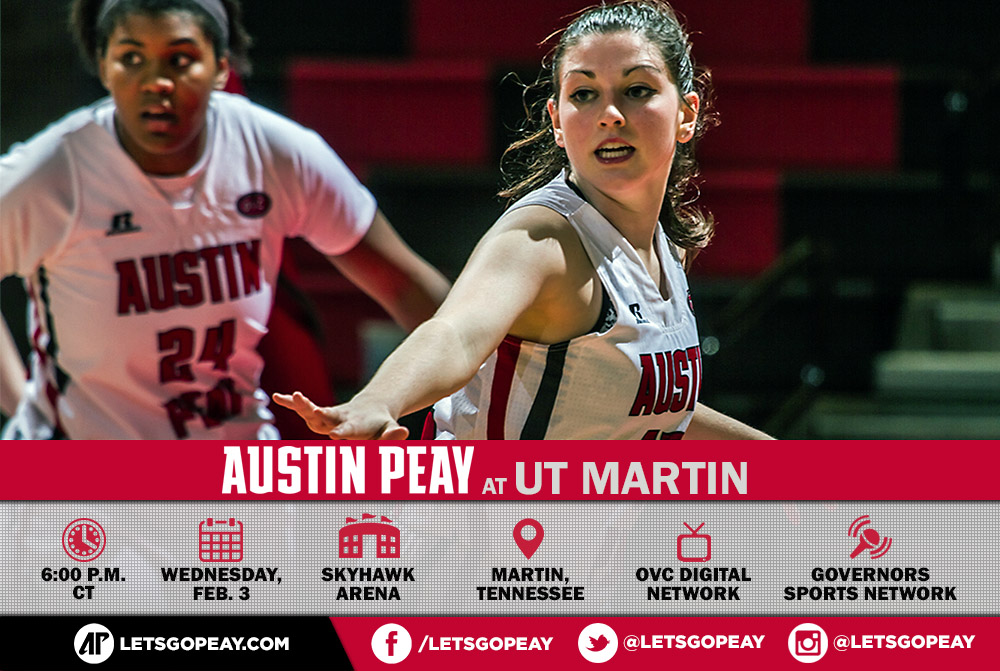 The Governors are amidst a four-game road trip, which they started with a 71-69 loss at Southeast Missouri, Saturday. 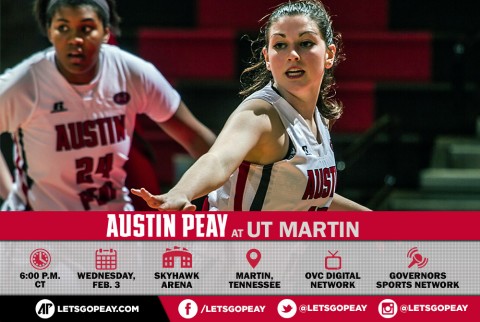 Austin Peay saw the Redhawks make 21 free throws – the most of any APSU opponent this season – including four in the final 71 seconds to secure the win.

The late turn of fortunes negated another stellar performance by senior guard Tiasha Gray, who led all scorers with 28 points. It was her 30th consecutive double-digit scoring outing, which dates back to last season, and saw her make 11-of-26 from the floor. Gray added four rebounds, four steals and three assists in her 35-minute outing as she continued her march toward career milestones in assists and steals (see below).

With Saturday’s loss, Austin Peay fell into a tie for fifth place in the OVC standings. The Governors 5-4 mark is tied with Eastern Kentucky, both sitting two games ahead of the cutoff line for the OVC Championship.

Austin Peay will seek to end its current losing streak at the Elam Center, which has been one of the more inhospitable sites for it in recent seasons. The Governors have not won a game in Martin since Jan. 8, 2009. It is a six-game losing streak that has developed entirely during current UT Martin head coach Kevin McMillan’s tenure – now in its seventh season. Prior to his arrival, APSU had won 20 of 30 meetings at the Elam Center.

The Skyhawks are one of the OVC’s hottest teams currently, bringing a seven-game win streak into the midweek contest. UT Martin dropped its OVC opener to Eastern Kentucky and has since taken out that frustration on its opposition, winning by 10 or more points in each game of its current win streak.

Fifth-year senior forward Haley Howard is the OVC’s reigning Player of the Week after leading UT Martin to wins against Tennessee State and Murray State last week. She posted 20-point outings in each contest – 22 against the Tigers, 21 against the Racers – and has breached the 20-point mark seven times in 2015-16.

Saturday’s contest will be the 74th meeting between Austin Peay and UT Martin, with the Governors owning a 40-33 series lead. However, the Skyhawks have won the last eight meetings in the series, APSU’s last win in the series came exactly five seasons ago in a 69-61 victory on February 3rd, 2011 in Clarksville.

Bank on Banks
Junior center Tearra Banks is in rarified air at the season’s halfway point, entering Saturday’s game ranked 5th among Division I players in field goal percentage (59.8). Only one player in APSU history has finished a season shooting better than 60 percent – Gerlonda Hardin, who accomplished the feat all four years she played at Austin Peay and finished her career shooting 61.8 percent from the floor.

About the APSU Lady Govs

Facing one of the nation’s toughest nonconference slates (29th ranked) took its toll early as APSU averaged just 59.3 points per game against its 11 Division I opponents. It has popped the lid on its offense in conference action, averaging 76.9 points per game and topping the 80-point barrier five times in its first eight games.

During the nonconference portion of the schedule, Gray and Banks scored over 50 percent of APSU’s points. However, that percentage has declined in OVC play, with the duo averaging just 44 percent of the team’s scoring.

About the UT Martin Skyhawks

Could Wednesday be a trap game for the Skyhawks? The midweek meeting precedes their Saturday battle at league-leading SIU Edwardsville. Still, UT Martin owns the OVC’s longest active win streak (7 games), recovering from an OVC-opening 70-61 loss at Eastern Kentucky. Since the loss, UTM has outscored opponents 441-336, a +17.5 scoring margin.

However, UTM has yet to face SIUE and Belmont, the other two teams with it in the league’s top three.