Fans attending the game can receive a free ticket with the donation of an unopened toy to assist the Student Athlete Advisory Council’s Help an Elf drive.

The Governors are 4-2 on their home court this season, and 13-5 under second-year head coach David Midlick.

Since then, the Govs have lost back-to-back games to Western Kentucky and Evansville.

However, in that span, senior center Tearra Banks has been superb which led to a pair of career milestones.

In the WKU game, Banks eclipsed the 1,000-point plateau, and days later, captured her first OVC Player of the Week award.

For the season, the Louisville native ranks second in the league in scoring (16.1 ppg), while her 55.7 field goal percentage is fourth in the OVC and 45th nationally.

After 29 years as a collegiate head coach, which included becoming the winningest coach at Pittsburgh, Agnus Berenato is in the midst of her first campaign with the Owls. Kennesaw State has opened the season 1-6 throughout a challenging nonconference slate, including games against Vanderbilt, Georgia Tech and Georgia.

KSU’s lone win of 2016 came November 26th, a 72-60 nod over Savannah State. The Owls have two players averaging double figures, with Clara Young at 12.3 points per game and Allison Johnson close behind with 12.0 and a team-high 7.7 rebound per contest. Kennesaw State returns 11 letterwinners with just one newcomer on the squad.

The Owls average 54.1 points, while allowing opponents to score 71.7 per game.

Last Time Against the Owls

The two programs last met December 12th, 2015 in Kennesaw, with the Owls winning 73-65. For Austin Peay, Tiasha Gray and Tearra Banks combined to record 43 of the team’s 61 shot attempts, finishing with 28 and 22 points, respectively.

A force in the paint
In Saturday’s game at Evansville, Banks led the team with 22 points and a career-high 14 rebounds. It was her fourth double-double and 11th of her career, and also has led APSU in scoring 15 times over her four years.

Baker for three
Falon Baker returned from injury last season and lit it up front deep, hitting 48 threes with a 37.5 percentage. This season, she has knocked down 16 shots behind the arch, including three against Evansville, Saturday.

Senior forward Beth Rates needs one blocked shot to reach 100 for her career after moving to fifth all-time with 99 to pass Sonja Cox.

She is now three away from tying Joanne Arnold for fourth place.

B-Will on point
Junior point guard Bri Williams continues to produce numbers across the board, including four points, seven rebounds and five assists at Evansville. 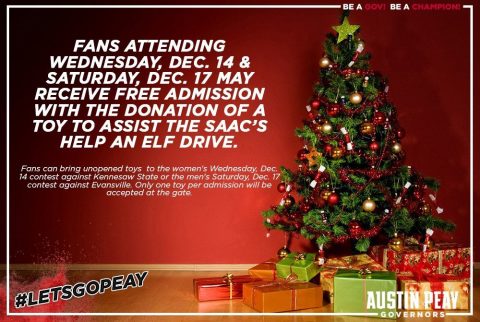 Austin Peay State University’s athletics department and its Student-Athlete Advisory Committee are seeking help to make the holiday season a little brighter for local families. Fans attending the Governors basketball games Wednesday, December 14th may receive free admission with the donation of a toy to assist the department’s Help An Elf drive.

Fans can bring unopened toys (see the list of children’s ages below) to the women’s contest against Kennesaw State. Only one toy per admission will be accepted at the gate.

The children being helped by the Austin Peay athletics department this season are:

The Annual Help an Elf program, developed by Austin Peay’s Student Affairs office, is designed to assist currently enrolled, full-time APSU students with holiday shopping by providing gifts for their children. Recipients of the holiday gifts will be children of income-eligible APSU students who are currently enrolled in 12 or more credit hours, and who are not participating in any off campus holiday gift programs.

The program has been a part of celebrating the holiday season and assisting APSU students and their families since 1994.

Be sure to follow all the Austin Peay women’s basketball action at www.LetsGoPeay.com and the official Facebook page of Austin Peay Athletics. In addition, live play-by-play coverage can be found on Twitter (@AustinPeayWBB), while fans can watch the game live on www.OVCDigitalNetwork.com