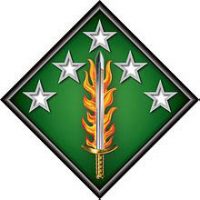 Shaking the hands of congressmen and getting their photos taken is not part of the usual Army day for Tygret and Murphy.

“It was an honor to be able to attend an event at this level,” said Tygret, “to see the career field, across all services, come together for the common goal of helping shed light on the EOD community. It was truly inspiring.”

Reflecting on the rigors of the EOD competition, Murphy said “It was an honor to attend such an event. I hope that others can look upon this, and the opportunities presented, and encourage them to compete in the future.”

The second floor foyer at the Rayburn House Office Building was filled with Soldiers and congressional representatives at the event sponsored by the Congressional EOD Caucus and the National Defense Industrial Association.

The entire foyer featured informational displays and specialized equipment with EOD specialists from each service explaining their unique missions.

Soldiers from the 28th EOD Company, Fort Bragg, NC; the 21st EOD Co., Kirtland Air Force Base, NM; and the 55th EOD Co., Fort Belvoir, VA, manned their display areas and answered questions about how they use their equipment to accomplish their missions.

Recognizing their success were Reps. Rick Crawford (R-Ark.), Brian Mast (R-Fla.), and Susan Davis (D-Calif.). Each representative had a personal relationship to the military: Crawford served in the Army as an EOD technician, Mast is a retired EOD technician who suffered catastrophic injuries while attempting to defeat an improvised explosive device, and Davis is an Air Force spouse whose husband served in Vietnam and her father served in World War II.

“You all are the ones that are called when our warriors who will deal with snipers and being shot at want to back up and go the other way [because of explosive ordnance],” stated Mast during his remarks to the EOD Soldiers gathered at the event. “You are the defenders of those who defend this country.”

The Congressional EOD Caucus was formed in 2011 by Reps. Crawford and Davis with the mission to educate other congressmen about EOD’s role in keeping our troops safe abroad, but also in supporting law enforcement in the homeland.

The caucus, with approximately 20 congressional representatives, added Mast and Tim Walz (D-Minn.) in 2017 as co-chairs.