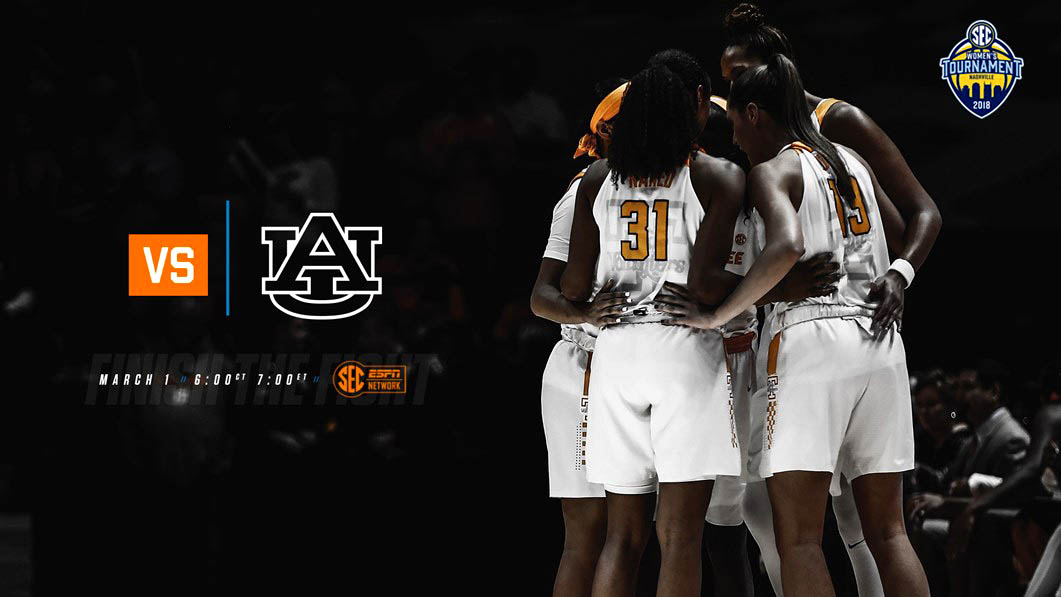 The Lady Vols, who tied for fourth in the SEC regular-season standings, fell to a No. 7 seed by virtue of a tiebreaker with No. 4 LSU, No. 5 A&M and No. 6 Missouri. Auburn finished 10th in the standings and earned the No. 10 seed.

UT and AU are meeting for the second time this season. Tennessee defeated the Tigers, 70-59, in Knoxville on January 4th in the teams’ second league contest. 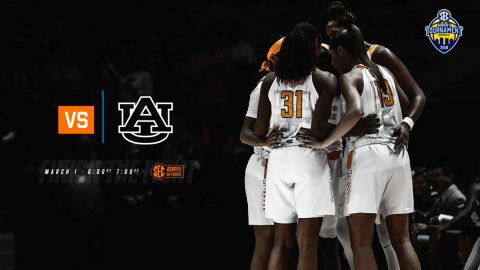 Tennessee comes to Nashville on a two-game winning streak and as the victor in six of its last eight contests after taking down #7/6 South Carolina in Knoxville on Sunday, 65-46.

The victory was UT’s third in a row over the Gamecocks and upped Holly Warlick‘s record to 5-3 vs. USC.

Auburn, meanwhile, is 3-3 in its last six games and ended a three-game losing skid with a 60-55 home victory over Ole Miss on Sunday.

Pam Ward (play-by-play), Gail Goestenkors (analyst) and Steffi Sorensen (reporter) will describe the action for the UT-Auburn television broadcast on the SEC Network.

Next Stops On The Tour

Selection Monday for the NCAA Women’s Tournament is on March 12th (7:00pm, ESPN).

UT is in the hunt to potentially host NCAA First and Second Round games March 16th-19th.

Tennessee In The SEC Tournament

Tennessee enters Thursday’s game with a 77-21 (.786) all-time record in the previous 38 years of the SEC Tournament.

UT is 33-5 in its opening game of the SEC Tournament, winning its debut contest 23 years in a row before falling in the 2017 second round to Alabama in Greenville, SC, 72-64, on March 2nd.

Holly Warlick has forged an 8-4 record in SEC Tournament games as a head coach, including 1-1 in title games.

Tennessee has had 15 SEC Tournament MVPs through the years, with a Lady Vol winning four of the last eight awards.

This marks the sixth time the SEC Women’s Basketball Tournament is being held in Nashville.

Music City previously hosted the tourney in 2002, 2004, 2008, 2011 and 2012 at the same venue (previously the Nashville Arena, Gaylord Entertainment Center, Sommet Center) albeit with different names than the current Bridgestone Arena.

The Lady Vols own a 12-2 record in the facility, winning their past nine contests there.

Being undefeated the past three trips there means the Lady Vols were the SEC Tournament champions in 2008, 2011 and 2012.

As an assistant then, Holly Warlick had a larger role in 2012 as floor coach assisting Pat Summitt, who had announced she was battling dementia, Alzheimer’s type, prior to the start of the season.

Tennessee has always had a strong presence on its roster from the mid-state area of Tennessee, and this season is no different.

Jackson has started all 29 games for the Lady Vols and is averaging 8.2 points and 4.2 rebounds, and is the team’s leader in three-pointers with 43.

Hayes, meanwhile, is the team’s top reserve, averaging 9.1 points, 3.3 assists and 2.7 rebounds. She was named the SEC 6th Woman of the Year.

Where We Started, Where We Are

UT was predicted to finish fourth in the SEC by the media and fifth by the coaches. The Lady Vols tied for fourth this season.

Tennessee opened the season ranked No. 11 in the AP Poll and No. 14 in the USA TODAY Coaches Poll. The Lady Vols are currently No. 12/12.

UT had lost two starters and three other players with starting experience from last year’s team.

Holly Warlick returned five players from a year ago, but only three with extensive minutes.

The Lady Vols welcomed five new players, including the No. 1-ranked 2017 signing class and a JUCO All-American coming off a redshirt year after having knee surgery.

The Lady Vols entered last season’s SEC Tournament looking for win 20. This time they are 23-6.

All UT alumni and Lady Vols fans in orange and white will receive 10% off any regular priced menu item at the George Jones, which will offer a handful of “Big Orange” themed menu items throughout the weekend. The UT band and spirit squads are slated to make appearances.

The Lady Vols have held their last two opponents (Florida, South Carolina) to an average of 44.0 points per game.

Tennessee held the Gamecocks to a season-low 46 points and forced USC into a season-worst 21 turnovers.

The Lady Vols also limited South Carolina to .347 shooting from the field, the Garnet & Black’s third-lowest of the season behind .323 vs. UConn and .345 vs. Missouri.

UT allowed South Carolina only nine points in the third quarter while scoring 29.

UT surrendered only two points to Florida in the third quarter (while scoring 24), the second fewest allowed in school history in a period and the fewest vs. an SEC foe.

Mercedes Russell needs a double-double to give her 15 for the season and stand alone for the most by a Lady Vol in a senior season. She is tied at 14 with Glory Johnson, Lisa Harrison and Shelia Collins.

The next double-double by Russell would be the 45th of her career, tying her with Candace Parker (45) for second all-time by a Lady Vol. Chamique Holdsclaw is first with 57.

Rennia Davis posted the eighth double-double of her rookie season vs. South Carolina, the sixth most of any UT freshman.

Jaime Nared and Mercedes Russell have been included as members of the Wade Trophy Award Midseason Watch List and Citizen Naismith Trophy Late Season Watch List. Nared is among the top 10 for the Cheryl Miller Awards, while Nared is in the same company for the Lisa Leslie Award.

UT has led 24 of 29 games this season at the half. UT trailed Mississippi State by 13, Missouri by six, Alabama by five and South Carolina (home) by five, and was tied vs. Auburn.

When UT has more fouls than its opponent, the Lady Vols are 2-4, losing to Texas A&M, Notre Dame, LSU and Missouri, and beating Marquette in OT and winning by 14 at Kentucky.

Tennessee has limited Auburn to 66 points or fewer 10 of the last 11 times they’ve met and to 61 or less on eight of those occasions.

This marks the 14th meeting between these schools in SEC Tournament play, with UT holding a 9-4 record in previous match-ups.

Auburn won the last meeting in tourney play, 78-58 in the 2009 semifinals in North Little Rock.

Chamique Holdsclaw scored a career-high 39 points vs. the Tigers on Feb. 14, 1998, marking the sixth-highest point total in Lady Vol history.

Tennessee has won in 13 of its last 15 trips to The Plains.

Last Meeting Between UT and AU

Senior Jaime Nared recorded a double-double with 19 points and 11 rebounds to lead No. 7/7 Tennessee to a 70-59 victory over Auburn (10-4, 1-1 SEC) on January 4th, 2018, at Thompson-Boling Arena. The win snapped a seven-game win streak for the Tigers and moved Tennessee to 14-0 for only the fifth time in school history.

Freshman Evina Westbrook chipped in a career-high 18 points and a game-high six assists, while senior Mercedes Russell added 10 points and four blocks on the night for Tennessee as the Lady Vols improved to 8-0 at home this season.

Daisa Alexander paced Auburn in scoring with 16 points, while Tiffany Lewis and Janiah McKay each added 10.

Auburn is led by Janiah McKay, who averages 16.3 points and 4.5 assists per contest.

SEC All-Defensive Team member Daisa Alexander chips in 14.1 points, with many of those coming via her 41 three-pointers made. She has 74 steals this season as well.

SEC All-Freshman Team member Unique Thompson is the Tigers’ other double-figure scorer at 11.8 per game. She paces the team with 8.7 rebounds per contest.

The Tigers were 0-8 in league play on the road and 2-9 overall at opponents’ venues. They are 1-2 at neutral sites.

AU returned nine letterwinners and three starters from last season’s squad, which finished 17-15 overall and 7-9 in the SEC, good for a tie for eighth.

Daisa Alexander led all scorers with 21 points, and Auburn sent its five seniors out in style with a 60-55 victory over Ole Miss on Sunday at Auburn Arena.

It was the fifth win in six years on Senior Day for Auburn (14-14, 5-11 SEC), which picked up its 11th home victory of the season and secured a winning SEC record at home for the second time in three seasons.

Alexander topped the 20-point mark for the sixth time this season on 7-of-12 shooting, including a perfect 3-for-3 day from beyond the 3-point arc. She also had three steals in the game. Unique Thompson added 15 points and nine rebounds, and Janiah McKay scored 12 points and had a game-high six assists.

After a pregame ceremony that celebrated their tremendous careers in orange and white, Mercedes Russell, Jaime Nared and Kortney Dunbar helped lead the Lady Vols (23-6, 11-5 SEC) to their third consecutive win against the Gamecocks (23-6, 12-4 SEC).

After a slow start on the offensive end, Tennessee opened the second half with a 14-0 run and grabbed all momentum. The Lady Vols overcame a 10-point second quarter deficit on Sunday, which was their largest comeback in any win this year.

Meme Jackson finished with 10 points and two blocks, while Evina Westbrook added eight points and Nared chipped in six with five boards. Doniyah Cliney netted 14 for the Gamecocks including a pair of 3-pointers.