Tampa, FL – According to AAA, Gas prices are nearly six cents cheaper in some states across the country on the week, which has pushed the national gas price average cheaper by a penny to $2.85 today.

That average could have been even lower had a handful of Midwest states not seen prices increase by more than a nickel due to ongoing refinery maintenance.

“Gas prices are getting cheaper for the majority of motorists despite the fact that U.S. gasoline stocks sit at a 7 million bbl deficit year-over-year. Crude oil prices have remained relatively stable the past few months, which is one reason helping gas prices be cheaper than last year at this time,” said Jeanette Casselano, AAA spokesperson.

“Today, motorists can find gas for $2.75 or less at nearly half of all gas stations in the country,” Casselano stated.

Compared to last month, today’s national average ($2.85) is cheaper by a penny and is seven cents cheaper year-over-year. 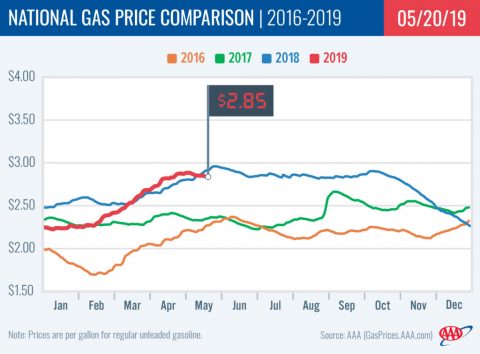 Amid refinery maintenance, gasoline stocks dropped by 700,000 bbl, squeezing total levels to 49.4 million bbl, according to the Energy Information Administration (EIA). This is not only the lowest level of the year, but a stock level historically only recorded in the second half of the year for the region and certainly not a level seen going into peak driving season.

The draw was one of the reasons three states in the region were among the top five weekly increases in gas prices in the country: Ohio (+11 cents), Michigan (+7 cents) and Indiana (+3 cents). These jumps mostly wiped up any decreases seen last week for these three states.  All other states in the Great Lakes and Central States saw pump prices decline by as much as a nickel on the week.

As previously reported, the region averages stock levels around 52 million bbl ahead of Memorial Day. With levels facing a 2.6 million bbl deficit, motorists should not be surprised if gas prices inch up this month, especially as refinery utilization remains under 90%.

On the week, gas prices are cheaper across the Mid-Atlantic and Northeast states ranging from $3.00 in Pennsylvania to $2.54 in Tennessee. With a four cent decrease, Delaware and North Carolina saw the largest decreases in the region and rank among the top 10 weekly changes in the country.

Looking at prices compared to last month, the region has states appearing on both the top 10 list for the smallest and largest monthly changes in the country. The states with the largest changes in the last month are Rhode Island (+12 cents) and Massachusetts (+11 cents). While the states with the smallest changes in pump prices are Maryland (no change), Virginia (+1 cent), Washington, D.C. (no change) and West Virginia (no change). However, some states have prices cheaper month-over-month: Tennessee (-6 cents) and North Carolina (-4 cents).

Motorists paid less to fill up this past week as gasoline stocks drew by 700,000 bbl, but that might not be the case for long. The EIA reports total stocks measure at 59.9 million bbl, which is a 3.3 million bbl deficit compared to last year at this time. A bump in refinery utilization could help to plump up stock levels to keep gas prices stable.

South and Southeast states are seeing some of the largest decreases in the country on the week with Florida (-7 cents), South Carolina (-4 cents), Mississippi (-4 cents) and Georgia (-3 cents) ranking among the largest pump price declines. With cheaper gas prices trending across the in the region, motorists can find gas for $2.50 or less at 49% of gas stations in South and Southeast states.

Pump prices declined as gasoline stocks built by 1.5 million bbl in the region, which was the only in the country to see an increase. At 82.9 million bbl and a 94% regional refinery utilization, reported by the EIA, motorists in the South and Southeast can expect gas prices to trend stable if not cheaper in the week ahead. However, a small spike ahead of Memorial Day Weekend is not out of the question.

While gas prices are more expensive on the week in Utah and Idaho, for the first time in weeks, none of these states landed on the top 10 list for largest weekly changes in the country. More so, gas prices increased by only two cents in Utah, Idaho and Wyoming, while Colorado ($2.84) and Montana ($2.86) prices held steady since last Monday. However, with a state average of $3.20 in Idaho and $3.19 in Utah, these states carry among the top 10 pump prices in the country.

Gasoline stocks in the Rockies region drew by 400,000 bbl to total levels at 6.3 million bbl. The draw might have been larger had regional refinery utilization not jumped by 10% to 93%. The increase in utilization helped to keep prices mostly stable despite gasoline stock levels not sitting this low since September 2017. Stock levels and utilization will be major factors determining the movement of gas prices in coming weeks, which is likely to trend more expensive.

Pump prices in the West Coast region are the highest in the nation, with all seven states landing on the nation’s top 10 most expensive list today.

The EIA’s recent weekly report for the week ending on May 10 showed that West Coast gasoline stocks fell again by approximately 700,000 bbl from the previous week and now sit at 26.4 million bbl. The current level is 3.3 million bbl less than last year’s level at this time. The West Coast may see continued price volatility and shrinking gasoline stocks this week, increasing pump prices for motorists in the region.

At the close of Friday’s formal trading session on the NYMEX, WTI dropped 11 cents to settle at $62.76. Crude prices increased last week due to rising global tensions that saw attacks on oil tankers in the Strait of Hormuz and on a Saudi Arabian oil pipeline. Those attacks only increased supply concerns that have been building due to the United States taking a tough line on sanctions against Iran and unrest in Venezuela and Libya leading to disruptions of supplies from those countries.

Crude prices will likely continue their ascent this week after OPEC and its partners met over the weekend to discuss compliance with the group’s 1.2 million b/d production reduction agreement that has been in place since January 2019. The group will formally decide if it will keep the agreement in place beyond June at next month’s meeting, but after this weekend’s compliance meeting, Saudi Energy Minister Khalid al-Falih said that there was consensus among participants to continue to drive down crude inventories for the remainder of the year.