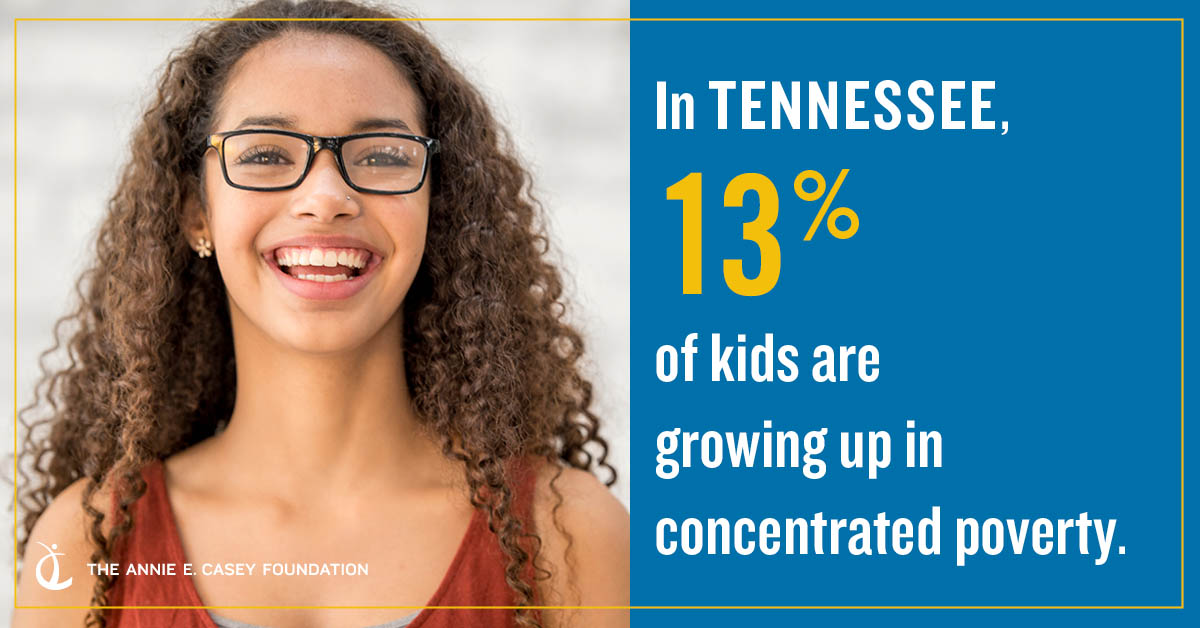 One of 29 States Nationwide to Show Progress in Child Poverty Rate According to New Data Snapshot from the Annie E. Casey Foundation

Nashville, TN – The percentage of Tennessee children living in areas of concentrated poverty fell 7% between 2013 and 2017, according to “Children Living in High Poverty, Low-Opportunity Neighborhoods,” a new KIDS COUNT® data snapshot released today by the Annie E. Casey Foundation.

Using the latest data available from the U.S. Census Bureau, the snapshot examines where concentrated poverty has worsened across the country despite a long period of national economic expansion.

Living in a neighborhood with a high level of concentrated poverty, in addition to putting children at risk from environmental exposure and reduced opportunities, can cause chronic stress and trauma. 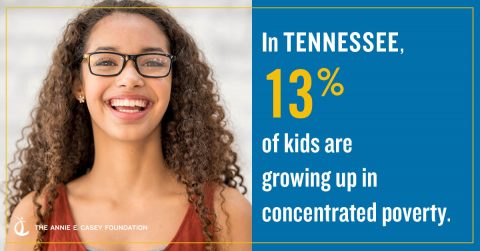 The Tennessee Commission on Children and Youth, the Tennessee KIDS COUNT affiliate, partners with other state and private agencies through the state’s Building Strong Brains Tennessee strategy to empower all Tennesseans to respond to childhood adverse experiences.

The 200,000 Tennessee children living in concentrated poverty would nearly fill Neyland Stadium twice and make up almost one of every eight children in the state.

“Our state’s future relies on the stimulus we are giving the brains of its future wage earners though healthy nutrition and quality education,” said Richard Kennedy, TCCY’s executive director. “We need to make sure all of our children have the resources and opportunities they need to be successful.

Growing up in a community of concentrated poverty — that is, a neighborhood where 30 percent or more of the population is living in poverty — is one of the greatest risks to child development. Alarmingly, more than 8.5 million children nationwide live in these settings. That’s nearly 12 percent of all children in the United States.

Children in high-poverty neighborhoods tend to lack access to healthy food and quality medical care and they often face greater exposure to environmental hazards, such as poor air quality, and toxins such as lead. Financial hardships and fear of violence can cause chronic stress linked to diabetes, heart disease and stroke.

And when these children grow up, they are more likely to have lower incomes than children who have relocated away from communities of concentrated poverty. These conditions work together to create an environment of toxic stress.

“Toxic stress affects the developing brain. Our youngest children are the most likely to live in low income households,” said Kennedy. We need to develop solutions to help families and their children live in safe communities and grow up healthy.”

Key findings from the snapshot’s examination of all states include:

The Casey Foundation calls on national, state and local stakeholders to act now to help families lift themselves out of these circumstances. Policies at the community, county and state level that can have a significant impact on the lives of children in struggling families include:

“Tennessee state government has been recognized as a national leader in fiscal stability and in innovation in problem solving,” said Kennedy. “Providing better training and work opportunities for families to assist them to rise out of poverty would help us prevent and mitigate the effects of these problems, increase community safety and prosperity and strengthen our state.”

The report, “Children Living in High Poverty, Low-Opportunity Neighborhoods,” may be accessed online at https://www.aecf.org/resources/children-living-in-high-poverty-low-opportunity-neighborhoods/.

Journalists interested in creating maps, graphs and rankings in stories about child well-being can use the KIDS COUNT® Data Center at https://datacenter.kidscount.org/

About the Tennessee Commission on Children and Youth

The Tennessee Commission on Children and Youth is an independent agency created by the Tennessee General Assembly. Its primary mission is to advocate for improvements in the quality of life for Tennessee children and families. Information on the agency is available at www.tn.gov/tccy

About the Annie E. Casey Foundation

The Annie E. Casey Foundation creates a brighter future for the nation’s children by developing solutions to strengthen families, build paths to economic opportunity and transform struggling communities into safer and healthier places to live, work and grow. For more information, visit www.aecf.org. KIDS COUNT® is a registered trademark of the Annie E. Casey Foundation.