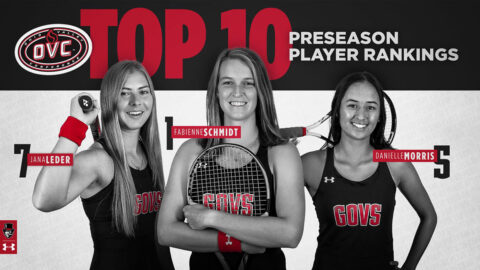 The Governors received eight of nine first-place votes in the 2021 women’s tennis preseason poll, as voted on by the league’s head coaches.

Last season, head coach Ross Brown and the APSU Govs were picked to win the OVC in the 2019-20 preseason poll, but the season was cut short due to the COVID-19 pandemic. The Governors were off to a 9-3 start to last season but had yet to play any conference matches when the season was ended.

Schmidt was named the No. 2 player in the OVC in the 2019-20 preseason player rankings, but she was able to overtake Eastern Illinois’ Rachel Papavasilopaulos, who was No. 1 in last season’s rankings and came in at the No. 2 spot this season. The Hillscheid, Germany, native posted a 9-2 singles mark and a 10-2 doubles mark in last year’s shortened spring season.

In Austin Peay’s season-opening match against Central Arkansas, Schmidt picked up a win in the No. 1 singles and No. 1 doubles matches.

After being named the No. 6 player in last season’s preseason rankings, Morris moved up a spot and was tabbed as the No. 5 player in the OVC this season. The Brisbane, Australia, native led the Governors with 17 singles wins across the fall and spring last year, and posted a 9-3 singles mark in the spring while playing mostly on the No. 2 line.

Morris dropped her singles bout in the Govs first match against Central Arkansas, but she picked up a win in the No. 1 doubles match while playing with Schmidt.

Tabbed as the No. 7 player in the OVC for 2021, Leder was the final Governor to make the top-ten list this season. The Remchingen, Germany, native won the first ten singles matches of her APSU career last spring and posted a 6-4 doubles mark while playing exclusively with Morris in the No. 1 position.


The Govs have already started the 2021 season and will be back in action when they start a four-match road trip with a February 14th match at Chattanooga. In the time of COVID-19 Coronavirus, there is always a chance that a match will be postponed or not come to fruition.