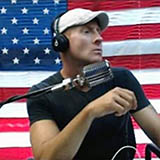 Alternating serious and comic takes, Potvin took shots at national Democrats and local Republicans on a wide variety of issues.

On the issue of immigration, Potvin slammed local Republicans, whom he believes ignore the issue of illegal workers in the Clarksville area.  “You and I know where the illegals are around here.  They’re throwing bricks and digging holes in all these new neighborhoods.  They’re changing sheets at our hotels.  They’re washing dishes in our restaurants.  They’re picking tobacco in our fields.  They’re mowing grass.  Anybody can go and find where they’re working.

And if Republicans really cared about curbing the issue, they would go after the people PAYING these illegal workers to get paid cash under the table.  But they never will.  Because they benefit from it.”  He continued by saying, “I’m calling out you Republicans talking about the border crisis like it’s a million miles away.  It’s not.  It’s right here too and you know it.”

Potvin also admonished what he called the “liberal media,” telling them to  “stop trying to convince me that I’m somehow guilty by association because I have the same skin color as the cop who killed George Floyd.  I have no relation to him.  No connection.  I’m not a fan.  I’m glad he’s behind bars.”

Although Potvin ran as a Democrat in the local mid-terms in 2018 (losing in the General Election to State Representative Curtis Johnson), his Sunday night talk show leaned decidedly Right on several topics.  Potvin sympathized with Trump voters questioning the results of the recent presidential election and poked fun at national Democrats on many occasions.

At one point, while discussing the recent Academy Awards, Potvin talked about last year’s Best Picture winner, “Parasite”, which he jokingly called “the Hunter Biden Story.”


Potvin and Padula are clearly looking to create a weekly talk show in the spirit of the early Howard Stern Show and may end up succeeding as long as Potvin and his co-hosts continue mocking all sides equally.