“Hurricane Nicholas complicated and slowed the recovery from Ida, but the seasonal drop-off in demand helped mitigate price increases on the week,” said Andrew Gross, AAA spokesperson. “We aren’t in the clear yet, though. We are only at the mid-point for hurricane season, and it has been an active one so far, with 17 named storms already. Motorists can expect price fluctuations into October.”

Approximately 23% of offshore Gulf of Mexico oil production remains offline. However, most storm-affected refineries are reporting some level of restarting. Once fully back online, refinery production will help to increase domestic supply levels, which took another step back by 2 million bbl to 218 million bbl in EIA’s latest report. 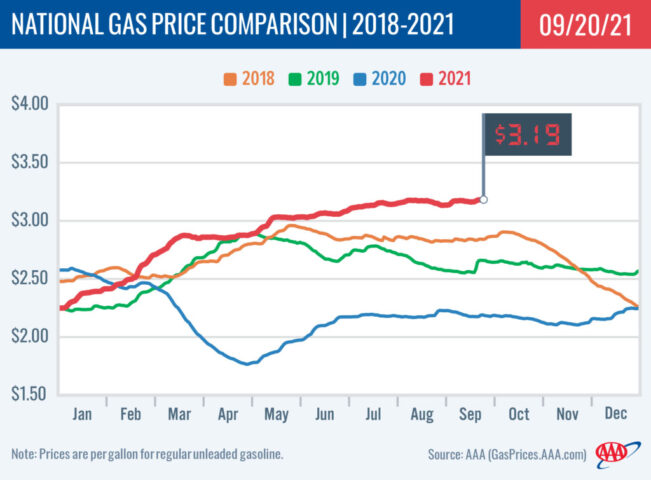 This is the lowest stock level since the post-Hurricane Harvey period in 2017. The tightened supply level has contributed to an increase in oil prices, which hit a high of $72 bbl last week, a level not seen since July. If the price of oil remains at this level or goes higher, it will likely result in higher prices at the pump.

At the close of Friday’s formal trading session, WTI decreased by 64 cents to $71.97. Although crude prices decreased on the day due to a stronger dollar, prices primarily increased last week due to the market reacting to impacts from Hurricanes Ida and Nicholas.

Additionally, crude prices rose after EIA reported that total domestic crude inventories dropped by 6.5 million bbl to 417.4 million bbl. As crude production remains constrained and the price per barrel remains above $70.00, a level not seen since July, pump prices will likely remain elevated.